The consequences of all these scandals for the reputation of the Catholic Church are disastrous. Important church leaders have already admitted this. Numerous innocent and committed pastors and educators are suffering under the stigma of suspicion now blanketing the church. You, reverend bishops, must face up to the question: What will happen to our church and to your diocese in the future? It is not my intention to sketch out a new program of church reform. That I have done often enough both before and after the council. Instead, I want only to lay before you six proposals that I am convinced are supported by millions of Catholics who have no voice in the current situation.

1. Do not keep silent: By keeping silent in the face of so many serious grievances, you taint yourselves with guilt. When you feel that certain laws, directives and measures are counterproductive, you should say this in public. Send Rome not professions of your devotion, but rather calls for reform!

2. Set about reform: Too many in the church and in the episcopate complain about Rome, but do nothing themselves. When people no longer attend church in a diocese, when the ministry bears little fruit, when the public is kept in ignorance about the needs of the world, when ecumenical co-operation is reduced to a minimum, then the blame cannot simply be shoved off on Rome. Whether bishop, priest, layman or laywoman – everyone can do something for the renewal of the church within his own sphere of influence, be it large or small. Many of the great achievements that have occurred in the individual parishes and in the church at large owe their origin to the initiative of an individual or a small group. As bishops, you should support such initiatives and, especially given the present situation, you should respond to the just complaints of the faithful.

3. Act in a collegial way: After heated debate and against the persistent opposition of the Curia, the Second Vatican Council decreed the collegiality of the pope and the bishops. It did so in the sense of the Acts of the Apostles, in which Peter did not act alone without the college of the apostles. In the post-conciliar era, however, the pope and the Curia have ignored this decree. Just two years after the council, Pope Paul VI issued his encyclical defending the controversial celibacy law without the slightest consultation of the bishops. Since then, papal politics and the papal magisterium have continued to act in the old, uncollegial fashion. Even in liturgical matters, the pope rules as an autocrat over and against the bishops. He is happy to surround himself with them as long as they are nothing more than stage extras with neither voices nor voting rights. This is why, venerable bishops, you should not act for yourselves alone, but rather in the community of the other bishops, of the priests and of the men and women who make up the church.

4. Unconditional obedience is owed to God alone: Although at your episcopal consecration you had to take an oath of unconditional obedience to the pope, you know that unconditional obedience can never be paid to any human authority; it is due to God alone. For this reason, you should not feel impeded by your oath to speak the truth about the current crisis facing the church, your diocese and your country. Your model should be the apostle Paul, who dared to oppose Peter “to his face since he was manifestly in the wrong”! ( Galatians 2:11 ). Pressuring the Roman authorities in the spirit of Christian fraternity can be permissible and even necessary when they fail to live up to the spirit of the Gospel and its mission. The use of the vernacular in the liturgy, the changes in the regulations governing mixed marriages, the affirmation of tolerance, democracy and human rights, the opening up of an ecumenical approach, and the many other reforms of Vatican II were only achieved because of tenacious pressure from below.

5. Work for regional solutions: The Vatican has frequently turned a deaf ear to the well-founded demands of the episcopate, the priests and the laity. This is all the more reason for seeking wise regional solutions. As you are well aware, the rule of celibacy, which was inherited from the Middle Ages, represents a particularly delicate problem. In the context of today’s clerical abuse scandal, the practice has been increasingly called into question. Against the expressed will of Rome, a change would appear hardly possible; yet this is no reason for passive resignation. When a priest, after mature consideration, wishes to marry, there is no reason why he must automatically resign his office when his bishop and his parish choose to stand behind him. Individual episcopal conferences could take the lead with regional solutions. It would be better, however, to seek a solution for the whole church, therefore:

6. Call for a council: Just as the achievement of liturgical reform, religious freedom, ecumenism and inter-religious dialogue required an ecumenical council, so now a council is needed to solve the dramatically escalating problems calling for reform. In the century before the Reformation, the Council of Constance decreed that councils should be held every five years. Yet the Roman Curia successfully managed to circumvent this ruling. There is no question that the Curia, fearing a limitation of its power, would do everything in its power to prevent a council coming together in the present situation. Thus it is up to you to push through the calling of a council or at least a representative assembly of bishops.

With the church in deep crisis, this is my appeal to you, venerable bishops: Put to use the episcopal authority that was reaffirmed by the Second Vatican Council. In this urgent situation, the eyes of the world turn to you. Innumerable people have lost their trust in the Catholic Church. Only by openly and honestly reckoning with these problems and resolutely carrying out needed reforms can their trust be regained. With all due respect, I beg you to do your part – together with your fellow bishops as far as possible, but also alone if necessary – in apostolic “fearlessness” ( Acts 4:29, 31 ). Give your faithful signs of hope and encouragement and give our church a perspective for the future.

I have posted the full text of Hans Kung's letter
on the FOOTNOTES page. 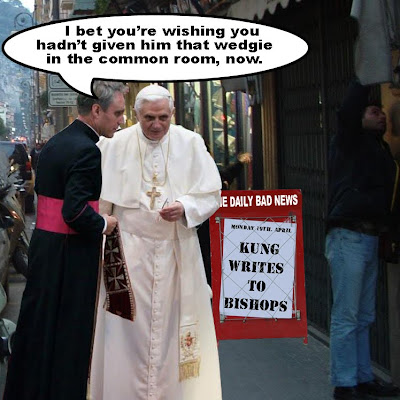