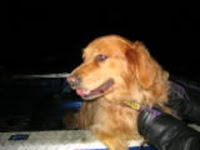 A golden retriever named "Lady" was a good and loyal dog until the end. Lady stayed by her owner, Parley Nichols' side in a field just outside of Hartville, almost a mile from their home, for almost a week after he died His body was found on Wednesday night. 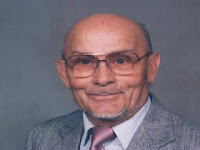 Even though family members passed out fliers and searched for Nichols, his body was only discovered after Lady barked at a passerby. Stark County Coroner's Investigator, Harry Campbell, said the dog likely drank water from a nearby drainage ditch. But there were no signs of food near Nichols.

The preliminary findings of an autopsy lead the Stark County Coroner to believe that Nichols suffered a natural death due to heart and lung disease.

Thanks to Paul (A) for sending
this story into MadPriest Towers.