My ears pricked up when I heard the Archbishop of Canterbury was planning a visit to Gaza last February, and Lambeth Palace was “actively engaged in humanitarian relief and advocacy”.

I asked for more information. Whom would he meet? Would he see the health minister? Would he sit down and talk with elected prime minister Ismail Haniyeh, man of God to man of God, Mr Haniyeh being an imam? I’d like to be a fly on the wall at such a meeting. Would he “do Gaza proud by spending a generous amount of his time with senior members of the Islamic faith”? And would he look up Fr Manuel Mussallam, the redoubtable old priest who was a mainstay of the Christian community thoughout Gaza’s darkest hours and tells it straight? His office didn’t reply.

Looking at his website again now, I see he did none of those things. At least, he doesn’t mention them if he did.

The Archbishop of Canterbury is Britain’s ‘Mister Christianity’, the top cat in the Anglican Church. His website explains that his role as a figure of unity in the worldwide Anglican Communion, which is represented in over 130 countries, means that “he is in a unique position to bring the needs and voices of those fighting poverty, disease and the effects of conflict, to the attention of national and international policy makers and donor agencies.”

He started his Ecumenical letter this Easter by saying: “Christians need to witness boldly and clearly,” and ended with: “The world will not be saved by fear, but by hope and joy… In whatever way we can, we must seek to communicate this joy, however dark or uncertain the sky seems.”

Hope and joy? Tell that to the Palestinians, especially those in Gaza.

Since his return has he said anything about Gaza in the House of Lords, where he has a voice in Parliament? It seems he hasn’t opened his mouth there for over a year, hasn’t spoken in any debates and hasn’t voted. He’s a below-average performer.

So what was all that about bringing the needs of people suffering the aftermath of conflict to the attention of policy makers?

The Archbishop said in a press release that peace would not be achieved without sacrifice on all sides because the interests of one were intimately bound up with the interests of the other.

Sacrifice? How much more must Palestinians sacrifice, one wonders…?

... Kairos is a group of Palestine Christians who recently produced a document entitled “A Moment of Truth” — their word to the world about the occupation and an expression of their faith, hope and love from the heart of Palestinian suffering. It is a call for solidarity to end over six decades of oppression.

Kairos Palestine calls on churches worldwide, church-related organisations, Christians and the wider international community to “condemn these shameful developments and work to restore the justice that is both our calling and our right”.

I feel sure the Archbishop knows about this. It’s Holy Land business and central to his faith. What has he to say? Will he show leadership?

And can we hope to see this shaggy-bearded prelate standing on the brow of the leading ship in the flotilla that will soon set sail to break the siege of Gaza?

That’ll be the day… Our Mister Christianity needs to be someone like Desmond Tutu who’ll take the bull by the horns.

Read all this perceptive article, written by a commentator
from "outside of the camp," at DISSIDENT VOICE. 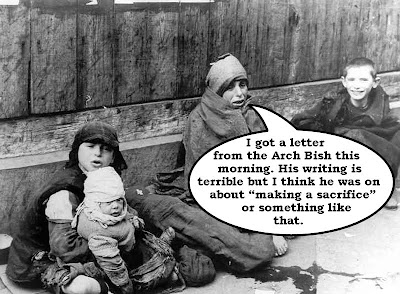