From the April issue of the newsletter of
ST. THOMAS EPISCOPAL CHURCH, Bath, NY.

After twenty years of loving relationship, my partner Carl Johengen and I have decided that it is time that we were legally married. Because the Church’s blessing is so important to us, we are taking the giant step this summer. I want to say a bit about the evolution of my thoughts on the journey to this point.

I am lucky to have grown up in a home environ- ment free of prejudice. My family did not contribute to any self-loathing, which is more than can be said for many gays or lesbians. That said, however, popular cul- ture did have a negative influence on my self-image. And although I have never believed that God created me as anything less than valuable and cherished by God, I have come to realize that I fight against my own homophobia virtually every day. There is a voice within me trying to tell me that I can’t do this or that because I am gay. Until recently, marriage was one of those things that inner voice spoke definitively against.

If one studies the history of marriage, one will quickly note that marriage has been primarily a legal arrangement for just about all of history save the last two centuries. It wasn’t until the last part of the 19th century that people began to see marriage as the natural outgrowth of romantic love. To this day, the tradition in Europe is for couples wanting to be married to go first to the court for legal marriage and then, if they are religious, they go to a church for a blessing.

It took me several years before I began to see the word “marriage” in purely legal terms. As a priest, when I “marry” someone, I act as an agent of New York State for a moment, much as a Justice of the Peace does. Only when we get to the blessing part do I assume my priestly role.

Because this state doesn’t allow same gender marriage yet, we will be seeking legal marriage in another state. After that, we will be coming to the Church for its blessing on Saturday, June 5, at 2:00pm at St. Thomas’. If you open your Prayer Book to page 433, you’ll discover a rite called “The Blessing of a Civil Marriage.” Our liturgy (it’s not a wedding!) will include not only the blessing but Holy Eucharist and a sermon. We are humbled by the breadth of support from the vestry and that not one but three bishops have offered to be part of our special day. Bishop Prince Singh (Bishop of Rochester) will preside and celebrate; Bishop Jack McKelvey (retired Bishop of Rochester) will preach, and Bishop Stephen Lane (former canon in this diocese and now Bishop of Maine) will administer the vows.

I understand this is not the first same-gender blessing to take place at St. Thomas, but I’m certain it is the first for a rector! 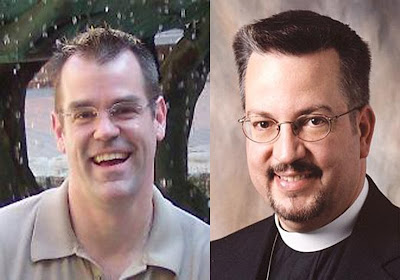 CONGRATULATION GENTLEMEN!
From all of us at OCICBW...

INTERESTING FACT: The other co-minister of music at the church is Roxanne Gaylord. Are the good people of St. Thomas's trying to tell us something?