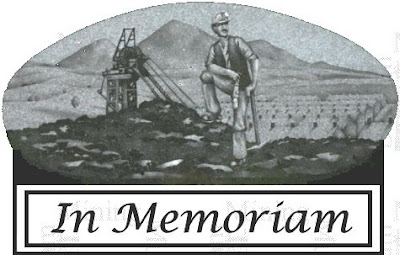 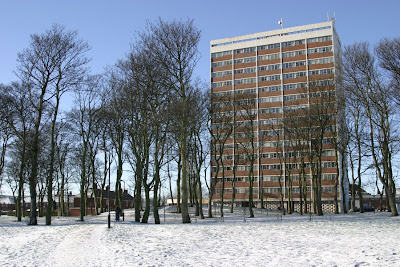 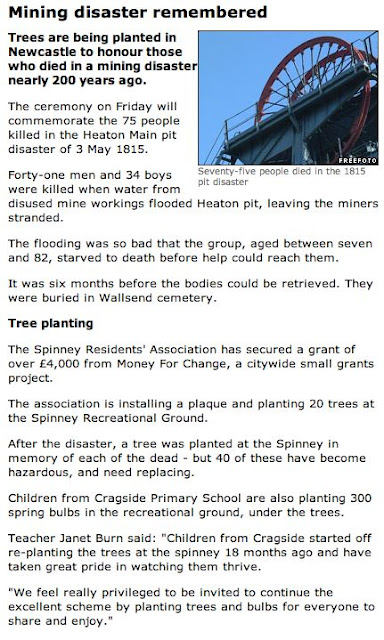 Although the BBC fail to mention me in the above report
from 2003, not only did I help at the tree planting, I
actually had the honour of blessing the trees and the
enterprise. The Spinney is in my parish. Had I been the
curate here 200 years ago I would not have been just
remembering the dead miners, I would have been burying
them. Just like Pastor Gary Williams will, more than
likely, have to do in West Virginia very soon. 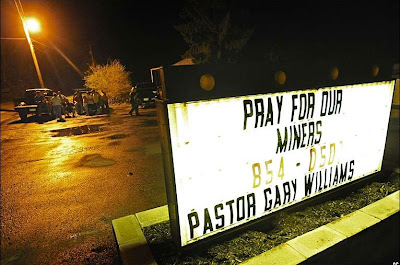 A full account of the 1815 Heaton Main mining disaster can
be found at THE DURHAM MINING MUSEUM website.

It's a small world when you are a working man or woman. It always has been. And there really is very little difference between back then and now as this words from "The Guardian" show:

The Upper Big Branch mine, about 30 miles south of Charleston, has a dire safety record. Three workers have been killed there in the past 12 years. Federal inspectors have fined the company more than $380,000 (£250,000) over the past year for repeated violations over the ventilation of the mine to prevent the buildup of the methane gas believed to be responsible for the latest accident. The authorities cited the mine for 57 safety infractions last month alone.

The mine is owned by Massey Energy, one of the country's largest operators. The company paid the largest financial settlement to date over a fire in another West Virginia coal mine in 2006 in which two miners died.

Here is a short, musical tribute to the miners who have died,
or will die unrescued, in West Virginia.

Oh can't you see that pretty little bird,
Singing with all his heart and soul.
He's got a blood red spot on his wing,
And all the rest of him's black as coal.

Of all the colors I ever did see,
Red and black are the ones I dread.
Oh when a man spills blood on the coal,
They carry him down from the coalmines dead.

Singing with all his heart and soul.
He's got a blood red spot on his wing,
And all the rest of him's black as coal.