From THE GEELONG ADVERTISER:

Geelong police shut down a bloody re-enactment of Jesus on the cross in Malop St on Saturday afternoon deeming it too offensive for public viewing. Members of the Heaven on Earth church in Norlane staged the life-like performance outside Market Square Shopping Centre at 1pm.

It featured two women mourners in black and a semi-naked ``Jesus'' covered in fake blood ``crucified'' on a large wooden cross.

``We were pretty disappointed the police did it the way they did it. They didn't talk to us first, they just came and yanked the cord out of our amp and said we had to stop,'' Pastor Sarah Kenneally said. 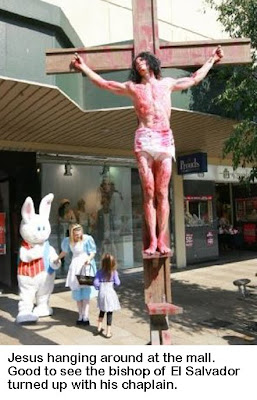 Hamlyn Heights mother Louise Bridges slammed the performance, calling it an ``absolutely disgusting stunt''. She said she was ``fuming'' at the public display and said it would ``scare children away from religion''.

She said her son was very disturbed and wasn't able to differentiate between real and fake blood.

``It was in your face. Coming out of either shopping centre you just couldn't avoid it, I was horrified,'' she said. ``My son was worried they were really hurting (Jesus) because he was covered in blood and moaning and calling out ``why, why''.

COMMENT: I don't know. Australians aren't what they used to be. And that Mrs Bridges' kid is going to grow up to be a poofter is she lets him get away with being such a nancy boy every time he sees someone being crucified in the streets.