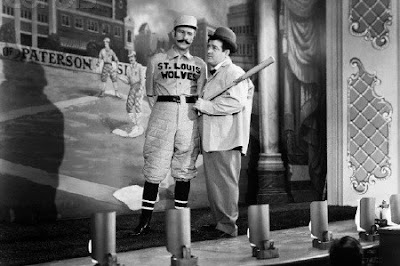 COSTELLO CALLS TO BUY A COMPUTER FROM ABBOTT

ABBOTT: Super Duper computer store. Can I help you?

COSTELLO: Thanks I'm setting up an office in my den and I'm thinking about buying a computer.

COSTELLO: No, the name's Lou.

COSTELLO: I don't own a computer. I want to buy one.

COSTELLO: I told you, my name's Lou.

ABBOTT: What about Windows?

COSTELLO: Why? Will it get stuffy in here?

ABBOTT: Do you want a computer with Windows?

COSTELLO: I don't know.. What will I see when I look at the windows?

COSTELLO: Never mind the windows. I need a computer and software.

COSTELLO: No. On the computer! I need something I can use to write proposals, track expenses and run my business. What do you have?

COSTELLO: Yeah, for my office. Can you recommend anything?

ABBOTT: I just did.

COSTELLO: You just did what?

COSTELLO: You recommended something?

COSTELLO: For my office?

COSTELLO: OK, what did you recommend for my office?

COSTELLO: Yes, for my office!

ABBOTT: I recommend Office with Windows.

COSTELLO: I already have an office with windows! OK, let's just say I'm sitting at my computer and I want to type a proposal. What do I need?

COSTELLO: The only word in office is office.

ABBOTT: The Word in Office for Windows.

COSTELLO: Which word in office for windows?

ABBOTT: The Word you get when you click the blue 'W'.

COSTELLO: I'm going to click your blue 'w' if you don't start with some straight answers. What about financial bookkeeping? You have anything I can track my money with?

COSTELLO: That's right. What do you have?

COSTELLO: I need money to track my money?

ABBOTT: It comes bundled with your computer.

COSTELLO: What's bundled with my computer?

COSTELLO: Money comes with my computer?

COSTELLO: I get a bundle of money with my computer? How much?

ABBOTT: Microsoft gave us a license to copy Money.

COSTELLO: They can give you a license to copy money?

ABBOTT: Why not? THEY OWN IT!

ABBOTT: Super Duper computer store. Can I help you?

COSTELLO: How do I turn my computer off?