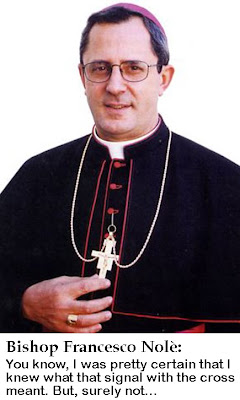 From THE PINK PAPER:

The bishop of Tursi, Francesco Nolè, has declared that ‘irregulars’ such as criminals and homosexuals should not be given communions or funerals. This, he said, is not to be seen as discrimination, but rather as ‘healthy medicine’ for those close to the person: “Our behaviour, which could be perceived as mean or cruel, in the long-run often heals and evangelises.”

He added: “We must have the courage and tact, perhaps first informing the individual, or the families if he has passed, that it’s not possible to administer a communion or funeral. We would perhaps pray for his soul, which must be done.”

His statements were made just days after two members of the Vatican were exposed as being part of a male prostitution ring.

Elsewhere, the Master of the Sistine Chapel choir, Clergyman Domenico Bartolucci, stated, “The church, with its eternal obsession with compassion, is or has already succumbed. Homosexual couples or those who are divorced and re-married are being called ‘irregulars’ instead of ‘public sinners’, and so the concept of sin itself goes down the drain. Nothing surprises me anymore. Homosexuality, which is a disease, has become something normal. They sprout like poisonous mushrooms, and instead of feeling shame they celebrate this plague and the church itself minimalises these sins. Homosexuality itself is not a sin, you can’t punish a sufferer. But it becomes one when the abomination is practised. It’s disgraceful.”

This item was brought to my notice by Mike G.