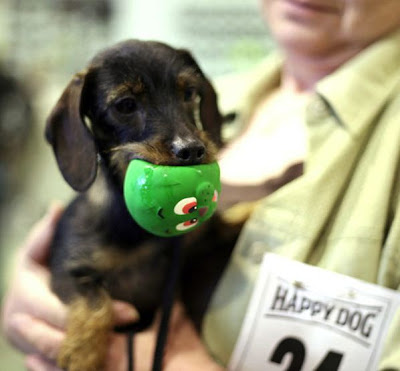 Bad news for the Wiener breed. Due, probably, to the fact that they are completely useless as a sex toy (SEE EARLIER ARTICLE) their numbers are declining rapidly in the home land.

According to DTK statistics, the number of dachshund puppies born in Germany has been shrinking for the last 40 years. Following the 1972 Munich Olympics, which were represented by plush dachshund mascot “Waldi,” the country saw a “Teckel boom” with more than 25,000 new puppies annually for several years. But that craze has long since subsided as other dog breeds became more popular.

“We have the most beautiful male who has won many competitions,” said Günter Hunger, a jovial 73-year-old Brandenburg native at the show whose family has owned dachshunds for generations. “Ten years ago he would have been in high demand for breeding, but now there is very little interest.”

COMMENT: I don't know why there are less Dachshunds in Germany but the worldwide dearth in their numbers is most likely due to the disgusting habit of cooking them in pastry popular in the US, as this comment to the above post reveals:

Disgusting and also greedy. You only need one dachshund to make a perfectly decent pie - not two. But then Americans have to supersize all their meals.