From THE DALLAS MORNING NEWS:

When Marie Meggs walked into Christ the Cornerstone Community Church in 2006, Pastor Otis Adams was surprised. Elderly white women don't drop by black churches often, and he assumed her first visit would be her last.

"It's just not normal," says the pastor of the DeSoto church. "Sunday is still the most segregated hour. ... Many times white people will come and once they recognize that it's a predominately African American church, then some won't even finish the service. And those who do, we never see them again."

But four years later Marie, 94, is such a cherished member of the congregation, the church is naming its new fellowship hall after her next month.

"She's become the mother of the church," says Adams, explaining the decision to honor Marie. "It's not just simply her age, it's not because she's of another race, but her impact on the church."

"We would meet in the hallway sometime or in the parking lot on the way to our cars," Ann Adams says. When Meggs' church moved, "I was hoping and praying that she would seriously consider coming with us."

Marie was born in 1915 in a log cabin in Dexter, Texas, outside Gainesville. Racial segregation was the norm when she was younger, but, she says, "I have always loved people, no matter black, yellow, white whatever."

The worship style at Christ the Cornerstone includes guitar and drums, piano and a choir with tambourines. It's different from what she's accustomed to. She doesn't sway during hymns, but rhythmically taps the back of the chair in front of her. She doesn't shout the way some congregants do, but claps her hands and murmurs the occasional "Amen."

"The only thing against it is it's too loud," she says.

On April 9, the weekend Christ the Cornerstone celebrates its fifth anniversary, a short ceremony will be held dedicating the Marie Meggs fellowship hall.

"It surprised me so much, I can't begin to tell," Marie says. "Only God knows how much I love those people."

COMMENT: For getting it right so quickly and so easily, Marie, Pastor Adams and the good people of Christ the Cornerstone Community Church are our joint...

Now, if God could just arrange for a gay couple to just wander into this church one Sunday morning... 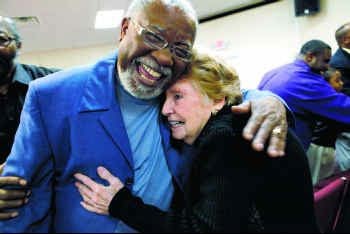