The Episcopal Church invites questioning, varied viewpoints and diversity in leadership and lifestyle, and “We won't tell you what to think,” Katharine Zeta Schori told about 140 people at St. Martha Episcopal, Papillion, yesterday.

In a speech, a question-answer session and an interview Saturday, Jefferts Schori repeatedly described hers as a faith that is open and not dogmatic.

“I read the Gospel to say that Jesus invited everybody into His community,” she said in an interview. “He dealt with all the categories that were deemed unacceptable in His day, and He said, ‘There's a place for you at my table.'”

She said Pope Benedict XVI's invitation to disaffected Anglicans (or Episcopalians) to join the Roman Catholic Church wasn't directed at conflict in the United States over female or gay bishops. England currently has a greater conflict over those issues. The height of the conflict is behind us," she said.

Jefferts Schori, 56, studied squids and octopuses while obtaining a doctorate in oceanography. 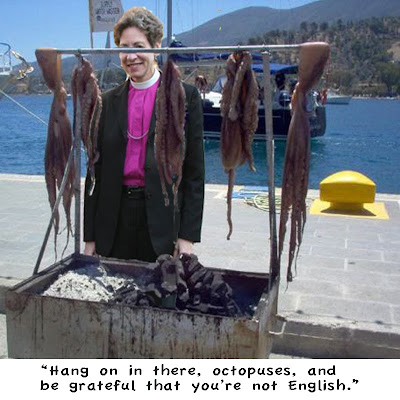