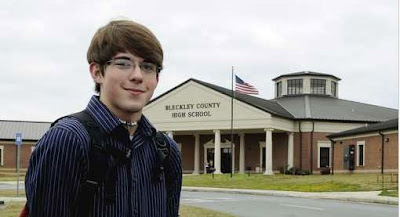 Gay-rights supporters from across the country are offering to buy everything from boutonnieres to dinner for a Bleckley County High School senior who was granted permission to take his boyfriend to the prom.
Derrick Martin asked his principal this year if he could take another male to his senior prom, set for April 17. At first school officials told the 18-year-old that the town of Cochran, with a population of 5,200, wasn’t ready for it. But, the high school only had a policy that barred bringing a date older than the age of 21, so school officials subsequently told Martin they granted his request.
Martin said he got 54 messages Tuesday on Facebook.
“I appreciate it,” he said. “I was speechless that they said they would buy me dinner or buy me a tux in case someone messed mine up.”

Martin said he pushed to take his boyfriend to the dance after hearing about a girl in Mississippi who asked to take her girlfriend to the prom. Her school eventually canceled the dance rather than allow them to attend together.

“Maybe (other gay students) will think if Bleckley County will let them, maybe my school will,” Martin said.
But because of the media attention, Martin’s parents have kicked him out and the teen is staying with a friend.

COMMENT: Well, of course, you all know what is coming, and quite rightly so too.

For being a great kid and a real gentleman,
young Derrick is, most definitely, our...

And shame on his parents. I suppose they would prefer a bad-mannered, stroppy, drug addled, truanting, gangsta son to a hard working, immaculately turned out, gay one. Well, I'll happily adopt him if his folks don't want him. He looks like just the sort of son who would look after his parents in their old age.