Please pray for my friend Margie. She is in ICU for pneumonia and sepsis.

By Denise Spencer. Posted by Chaplain Mike at INTERNET MONK:

There has been another change in Michael’s situation, and I would like readers to know so you can better pray for us.

At the encouragement of our oncologist, we have opted to discontinue treatment. He said the chemotherapy was not working, and it would actually be doing a disservice to Michael to continue. We are now receiving help from our local hospice. We know we are in good hands with them, and we are at peace that we have made the best decision under the circumstances.
Several people have already suggested various alternative treatments. While we appreciate their concern and helpfulness, we have discussed this possibility and Michael does not want to try anything else. Please pray for strength and acceptance, for trust in God, for minimal pain and for a peaceful passing.
“Our citizenship is in heaven. And we eagerly await a Savior from there, the Lord Jesus Christ, who, by the power that enables him to bring everything under his control, will transform our lowly bodies so that they will be like his glorious body.” (Philippians 3:20-21)
Thank you, one and all, for your continued prayers.
This prayer request comes via BENE DICTION BLOGS ON where you read the background information for iMonk's sad, but ultimately triumphant, current situation.
***

By our good friend, TheraP.
Posted at TPM CAFE.

She wasn't perfect. And in many ways she had a hard life. She grew up during the depression. As a child she knew poverty. She knew abuse then too. She knew loneliness. And she never meant anyone any harm, though in her insecurity she needed obedient, respectful, dutiful children. She always tried to care about others. And she taught us never to exclude anyone: to share; to be kind and considerate; not to think we were better than others. Bigotry was not part of her nature and she instilled that in us as well. She did her best. Trying to hide her own problems and put on a good front - as best she could - all the while her husband was often away on business trips. We didn't see enough of our dad, but she tried to make up for that as best she could.

On their 66th anniversary (last month) she didn't comprehend the word "anniversary" or the reason for the tiny cake my father brought to the rehab unit. She told him to take it with him when he left. But he ate it. Bit by bit. Over 5 days. Two pieces the first day (one for him, one for her). And one on each on the following 4 days. At nearly 93, he thought it was the best cheesecake he'd ever eaten.

She went downhill quickly. Falling and gashing her head at the end of January. A week in the hospital. A few weeks in a rehab center, where they tried to cure a bedsore from vegetating in front of the TV - as her mind had slowly lost its bearings. It was Alzheimer's, but my dad simply could not bring himself to see what his children saw so clearly. Not till after she fell, when it suddenly dawned on him: "We've lost her."

The rehab center was way too chaotic for a person descending into the last stages of Alzheimer's. They were not set up to deal with such persons. Only with persons on the way to getting well. When she was on the way to death and dying.

Not till the rehab center, finding her more than they could handle, transferred her to the best psych unit in town, did we get the diagnosis of Alzheimer's. And one week later, the news that she was dying of it. There they calmed her down - in a quiet room - with quiet, carpeted hallways. Told us she needed nursing care. Next thing we knew, it was hospice care she needed.

I cannot begin to tell you of the kindness and consideration and compassion we received in this last place - the home that nursed her into death. She, as a resident, only for 6 days. We as family. They treated her like you'd treat a saint - if you knew a saint was dying. I'm not kidding! And they asked how we were doing too. Brought us snacks and beverages. Gave me sheets to spend the last two nights on a mattress on the floor next to her bed. I got to see the good care, night and day, that she received.

She was incoherent these last of her days. Hardly spoke at the end, except to moan now and then - words we could not comprehend. But she did clearly say things like "dying... good" and "I love" and "I love you" and "I'm sorry" and "bye-bye" and it seemed that the last night she called my name and seemed to try and moan when she heard my voice.

I never thought it would hit me so hard. Hearing that she was dying, as I drove home from a few days of retreat, a respite while my brother was in town. I never thought I would see her turn into a saint, as her body slowly wasted and desiccated, as her mind lost its bearings, while her spirit grew and grew. Till in the end I felt I was communicating soul to soul.

Addendum - via my brother, by Lord Byron:

My task is done -- my song hath ceased -- my theme
Has died into an echo; it is fit
The spell should break of this protracted dream.
The torch shall be extinguished which hath lit
My midnight lamp -- and what is writ, is writ --
Would it were worthier! but I am not now
That which I have been -- and my visions flit
Less palpably before me -- and the glow
Which in my spirit dwelt is fluttering, faint, and low.

Money raised so far for charity = $4.90.
Don't forget it is up to you to give your part of this to the charity of your own choice whenever you feel like doing so. 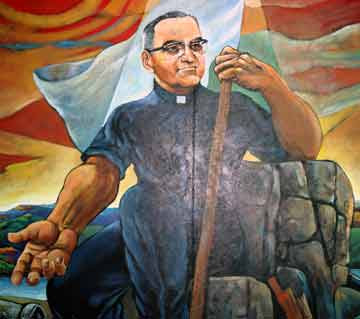 The Episcopal Church of El Salvador denounces before the general public and the international community the murder attempt that Bishop Barahona and two of his closest collaborators suffered.

This past Wednesday night (17th), Bishop Barahona, along two of his closest working partners, was victim of the violence that has held this country imprisoned. An unknown man, without saying anything, shot at them. The bullets hit the bishop’s driver, Francis Martínez, who is now hospitalized. Meanwhile, the bishop, thanks be to God, was unharmed.

What is odd about these events is that the police was just a couple of meters away. As the Episcopal Church, we are dismayed by this inexplicable fact. The bishop is a pastor whose principle function is to accompany spiritually the faithful who seek his advice and solace.

We lament profoundly this fact, as do many Salvadorans, who are victims of violence and impunity. We ask everyone’s prayers that hope in a different El Salvador is not lost and that this event is not a sign of persecution of the church.

The Most Rev’d Martín Barahona, 67 years old, has been the Bishop of the Anglican Church of El Salvador since 1992 and he is the Primate of the Anglican Communion in Central America (IARCA). This church is one of the historical churches, characterized by its prophetic accompaniment of the national reality.