Yes. With the new puritanism taking hold of no longer swinging California, Nepal now seems set to become the promised land for gay people wanting to be treated as normal human beings or, at the least, as if their money is worth something.

Nepal wants to paint Mount Everest pink. It wants gay honeymooners trekking through the Himalayas. It wants to host the world's highest same-sex wedding at Everest base camp. But mainly, the conservative Hindu nation wants a chunk of the multibillion-dollar gay tourist market to help pull it out of poverty.

That quest - brushing aside historical biases in pursuit of economic opportunity - is symbolic of one of the gay-rights movement's most stunning successes. Just five years ago, police were beating gays and transsexuals in the streets. Now, the issue of gay rights is almost passe here. Nepal has an openly gay parliamentarian, it is issuing "third gender" identity cards, and it appears set to enshrine gay rights, and possibly even same-sex marriage, in a new constitution. "[It] is not an issue anymore, for anybody," said Vishnu Adhikari, a 21-year-old lesbian. "Society has basically accepted us."

That acceptance has become a major marketing opportunity for a country cursed by desperate poverty but blessed with majestic beauty. Tourism is one of the main drivers of Nepal's economy, worth about $350 million last year, and government officials are determined to double tourism to one million visitors next year. They hope gay tourists will be far more lucrative than the backpackers who stay in cheap hotels here and travel on shoestring budgets.

"They do have a lot of income," said Aditya Baral of the Nepal Tourism Board. "If they behave well, if they have money, we don't discriminate."

COMMENT: "If they behave well, if they have money..."
Oh dear. That's all of OCICBW...'s gay readership out of it 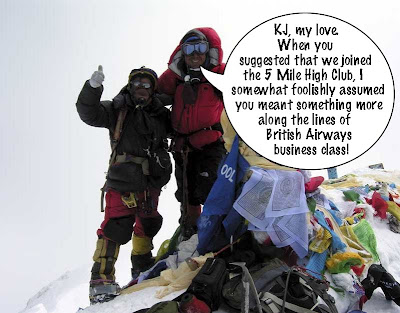