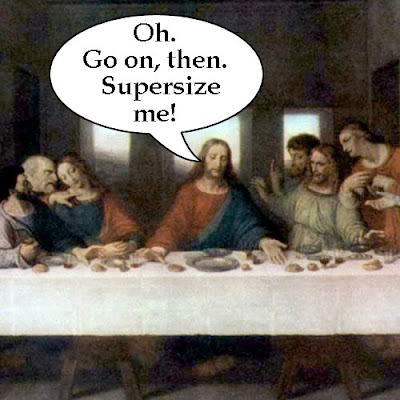 From THE BBC:
The food portions depicted in paintings of the Last Supper have grown larger - in line with our own super-sizing of meals, say obesity experts. The Cornell University team studied 52 of the most famous paintings of the Biblical scene over the millennium and scrutinised the size of the feast. They found the entrées, bread and plates put before Jesus and his disciples have progressively grown by up to two-thirds.

The team used computer-aided design technology to scan and calculate the relative measurements of items in the paintings, regardless of their orientation. These included works by El Greco, Leonardo Da Vinci, Lucas Cranach the Elder and Rubens.

Based on the assumption that the width of an average loaf of bread from the time should be twice that of the average disciple's head, the researchers plotted the size of the Passover evening dishes. The main meals grew 69% and plate size 66% between the oldest (carried out in 1000AD) and most recent (1700s) paintings. Bread size grew by about 23%. The sharpest increases were seen in paintings completed after 1500 and up to 1900AD. This, the researchers say, is art imitating life.