Posted by UKViewer at JOURNEY OF DISCOVERY:

Jen is off work for a while, she is still waiting for a call from the Hospital for surgery on the skull fracture, which is causing brain fluid to leak through her nostrils. Being NHS, it will not be done in the next day or so.

I had a call last week from the DDO regarding a meeting to discuss/discern my vocation towards Ordained Ministry in the Church. I had been in a great hurry for this in the past, but given the recent stuff going on in my life, felt that it was a little to soon, and it is postponed until after Easter. I need to be ready, to feel ready and to feel prepared before I go down that route. I see the period of Lent as that preparation and with a weekly Lent Course, spiritual direction, working in the Parish, and other church related responsibilities, I am having a quite busy time. But the nudge is there - and I am heeding it. God is calling, I am willing and nearly ready to answer.

Posted by Janis at JUANUCHI'S WAY:

I’m in the midst of an existential crisis. I was going to say that I’m not sure what’s brought this on, but I know what the catalyst was. In any event, the last few days I’ve been engaged in some serious depressive introspection.

For 23 years I have spent (my) time doing what Dad told me not to: doing something I don’t like. It is true, I have always been a square peg in a round hole with my career. But I was afraid of failure – failure in what, I don’t know, and I think in the long run, I have (in my estimation) failed. I don’t feel any satisfaction from these years gone. I haven’t done anything noteworthy. I’m exhausted, bankrupt, without goals, and simply don’t care anymore. I don’t crave the limelight, but I would like to think that I have done something in my life that made a difference to someone. I think Dad probably knew I should’ve been in the arts. But now, I’m afraid to introspect to the point of finding what I really want, what I really should do. I’m afraid. And very sad.

Okay you virtual huggers, our friend Janis needs you. Pop over to her place and do what you do so well. And the only advice that she needs to hear is that she must have the courage to follow her dreams, which is probably the only piece of advice we all need. So you could leave a comment along those lines. 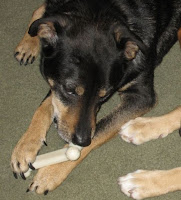 Late this afternoon CB took Cisco to the vet. X-rays showed an odd growth on the bone side of his leg, but the vet was not sure how long that had been there. He gave Cisco a steriod shot, which has made Cisco feel better. Tomorrow the radiologist will look more carefully at the x-ray. Otherwise, the vet said probably Cisco will be running around by Sunday.

UPDATE: Cisco is well on the way to a full recovery and back to being "the worst dog in the world." Check out his latest antics HERE.
***

I heard today from my sister that our former pastor's wife died from ALS. I hadn't seen them in nearly 20 years but it still bothers me to hear of people I know dying. Her youngest was about the same age as Zach and they used to play together a lot. I'm so sorry for their loss.

Posted by JaneR at ACTS OF HOPE:

Two years ago my parents' dear friend John Olver died. Today John's wife Ruth Olver died. We received news of Ruth's passing from Ruth and John's son this evening. Ruth had been very ill for several years. She had Parkinson's and other ailments, and she had recently turned 92 years old.

Ruth Olver lived a wonderful, long and totally righteous life. Pop over to Jane's place and read her obit. I promise you, it will make you feel good.

Please remember Ruth Olver and her children and grandchildren in your prayers. Remember also John, who preceded her in death two years ago and who like her worked for the good of humanity. Remember also my parents, who have yet again lost a dear friend of their generation.

Paul has a couple of lengthy "heart threads" up at
BYZIGENOUS BUDDHAPALIAN. You can read them
and then add his prayer requests to your own list
by clicking HERE and HERE.

Please go read Caminante's post on the recent assassination attempt on Bishop Martín Barahona (ref: PRAYER REQUEST 18th. March) at VERMONT'S OWN and continue to pray for our friends and all the good people in Central America. Remember, this sort of evil in places like El Salvador, is, to a large part, due to the failure of the US to clear up after the messes they engineer in other people's countries.

Money raised so far for charity = $3.70.
Don't forget it is up to you to give your part of this to the charity of your own choice whenever you feel like doing so. 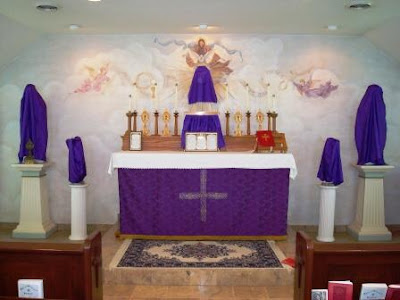 I'm a fussy, old catholic, but I've never understood why we cover up crucifixes during Passiontide when surely we should be meditating on the crucifixion. If anyone knows a "good" reason for this custom do please let me know what it is.