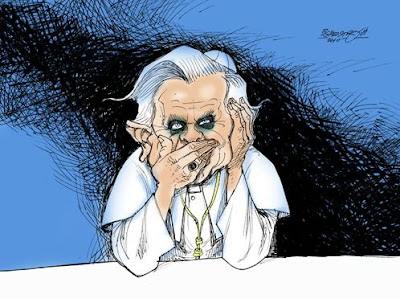 Thanks to Klady for sending the link to
this Austrian cartoon in to MadPriest Towers.

The German archdiocese led by the future Pope Benedict XVI ignored repeated warnings in the early 1980s by a psychiatrist treating a priest accused of sexually abusing boys that he should not be allowed to work with children, the psychiatrist said Thursday.

“I said, ‘For God’s sake, he desperately has to be kept away from working with children,’ ” the psychiatrist, Dr. Werner Huth, said in a telephone interview from Munich. “I was very unhappy about the entire story.”

Dr. Huth said he issued the explicit warnings — both written and oral — before the future pope, then Joseph Ratzinger, archbishop of Munich and Freising, left Germany for a position in the Vatican in 1982.

In 1980, after abuse complaints from parents in Essen that the priest did not deny, Archbishop Ratzinger approved a decision to move the priest to Munich for therapy.

Despite the psychiatrist’s warnings, Father Hullermann was allowed to return to parish work almost immediately after his therapy began, interacting with children as well as adults. Less than five years later, he was accused of molesting other boys, and in 1986 he was convicted of sexual abuse in Bavaria.

The psychiatrist said in an interview that he did not have any direct communications with Archbishop Ratzinger and did not know whether or not the archbishop knew about his warnings. Though he said he had spoken with several senior church officials, Dr. Huth’s main contact at the time was a bishop, Heinrich Graf von Soden-Fraunhofen, who died in 2000.