The head of the Catholic Church in Austria said the possible reasons behind sex abuse crises which have hit Austria, Germany, Ireland and the Netherlands in recent weeks should be subjected to "unflinching examination". In an article for an in-house Church magazine, Christoph Schönborn, the Archbishop of Vienna, called for a debate on celibacy, as the Vatican struggles to address a growing sex abuse crisis. He said it was time to examine "the issue of priest celibacy and the issue of personality development. It requires a great deal of honesty, both on the part of the Church and of society as a whole." His office later put out a "clarification" – reportedly under pressure from the Holy See – saying that the archbishop was "in no way seeking to question the Catholic Church's celibacy rule."

A Vatican expert, Bruno Bartoloni, said that Cardinal Schönborn was warning that "paedophilia can reflect the frustration of those priests who are not at ease with being celibate."

The Vatican's official newspaper, Osservatore Romano, added fuel to the debate with a front-page article suggesting that the "masculine conspiracy of silence" could be overcome if nuns and laywomen played a more prominent role in the Church.

But the Vatican insisted that the principle of celibacy was not open to negotiation.

COMMENT: Nuns and laywomen have been helping "those priests who are not at ease with being celibate" ever since the Roman Catholic hierarchy came up with the silly rule. What Cardinal Schönborn is calling for is honesty and openness, something the Roman Catholic hierarchy have had huge problems with even longer than they have had the silly celibacy rule. 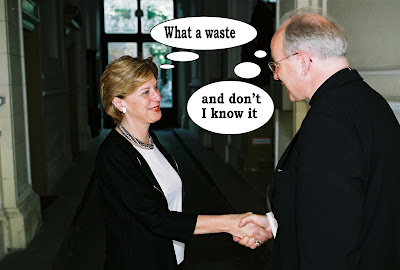