Management has ordered the removal of a statue of Christ that has adorned Killarney Community Hospital for over 70 years. Citing "health and safety reasons", but later hinting the decision had more to do with political correctness in not offending non-Catholics, Jesus was sent packing yesterday.

Politicians as well as patients and visitors to the hospital expressed sadness and dismay at the move and said it was political correctness gone mad.

Fr Kevin McNamara, a curate in Killarney, said: "People I visited today are extremely upset. We are demanding it be put back."

Councillor Brendan Cronin said staff and the elderly patients were extremely upset. "Where is the building survey that says this statue was a risk?" he said.

The HSE said that hospitals were "independent entities" and the decision to move the statue had been made by management in Killarney.

The statue had been there since September 1939 when World War II broke out.

COMMENT: If you walk round any European major town or city you will come across huge statues of long dead people dominating public spaces. During their lives many of these celebrated dignitaries were responsible for invading India, oppressing the workforce in sweatshop factories and mills and that sort of stuff. Heck, in Sutherland, Scotland there's even a huge column on top of a hill with a statue of the bloke who was responsible for the Highland clearances standing on top of it.

These statues are, in many ways, offensive but we are an intelligent race perfectly capable of viewing such things in context. Even the Scots believe the dastardly duke should stay on his plinth as a reminder of the awful things the English did to them (which is a bit weird as Mrs Sutherland, who erected the memorial after her husband's death was as Scottish as Billy Connolly).

So, yes, this story is about political correctness gone mad. If non-Catholics can't see it as a symbol of the care given in the hospital then they are just plain stupid and should be ignored anyway. What next - the Egyptian government demolishes the Sphinx because it's pagan origins might offend the tourists who go to see it? 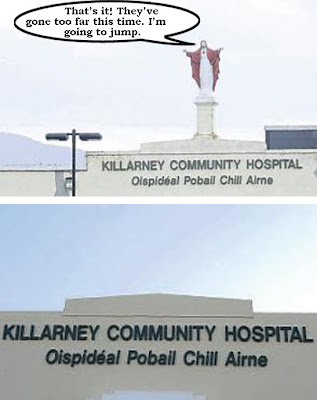