The Grand Tufti has condemned evangelist "bulies" who attempt to convert people of other faiths to Christianity. He said it was right to be suspicious of proselytism that involves "bullying, insensitive approaches" to other faiths.

In a speech at Guildford cathedral, he criticised those who believed they had all the answers amd treated non-Christians as if their traditions of reflection and imagination were of no interest to anyone. "God save us form that kind of approach," he said.

Later, the archbishop took part in 'An evening in conversation' with Jim Al-Khalili, author, broadcaster and Professor of Public Engagement, at the University of Surrey. The two discussed similar experiences of balancing a life of academia with that of being in the public eye. The conversation covered various topics including prayer, faith and science, and the role of religion in setting moral boundaries. During the discussion, the Archbishop urged individuals to resist being overwhelmed by the scale of the problems such as poverty and climate change, and to recognise the impact that individual decisions and actions can make in these areas. Then members of the public submitted questions for the Archbishop to address after the interview. Topics included Uganda's equality bill, violence in Iraq, and whether there is scientific proof for the existence of God. 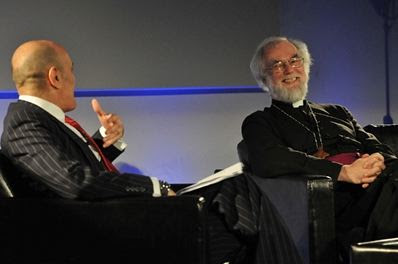