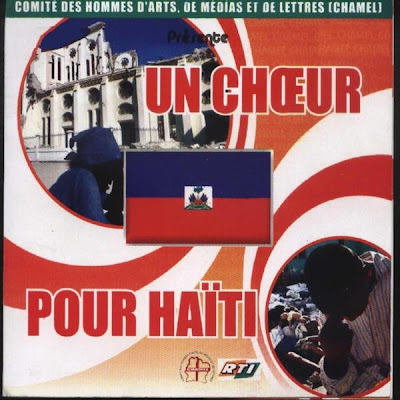 Since the earthquake in Haiti there must have been hundreds
of records released with the intention of any profits made
from them being donated to the relief operation. Most of
those records will have been made for the most noble of
intentions and most of them will be utter crap. Of course,
people will happily buy crap charity records as "We Are The
World" proved beyond doubt. And the fact that they do so in
such vast numbers proves that humankind is, on the whole,
incredibly stupid. It costs money to make a record and every
record made helps destroy a little bit more of the
environment. So, don't buy the record. Give all the money
that you were going to spend on the record straight to the
charity concerned. That way, the charity gets more money,
more people are helped and you don't have to live with a
shite record and the embarrassment of having made such a
stupid financial decision. You also have the extremely
satisfying bonus of not being involved in the publicity of the
careers of assorted pop music celebrities, whose individual
incomes will, in some cases, be greater than the entire gdp
of the country you are trying to help.
But, tonights mix on the Midnight Jukebox is a completely
different kettle of fish. It is a record highlighting the
suffering in Haiti which is not only musically good, but is,
in fact, bloody brilliant. I bought the tunes simply because
I like them. I have no idea where the music is from and who
it is by and if anyone does know, please do let me know. I
bought it from eMusic, a perfectly legal, download site.
If you listen to this selection of tunes and enjoy the
experience then pop something in the next collection
for Haiti that is shoved under your nose.