A group of renegade Scientologists are calling for a "Reformation" in the controversial faith, saying that members of Sea Org are being abused.

Christie King Collbran, 33, and her husband, Chris, 29, were recruited as teenagers to work for Sea Org. They signed a contract for a billion years – in keeping with the church's belief that Scientologists are immortal. They worked seven days a week, often on little sleep, for payments of $50 £33) a week.

The Collbrans were married in a ceremony at the Scientology centre in Manhattan. It was in Johannesburg, where the couple had gone to supervise the building of a new Scientology organisation, that Mr Collbran, 29, began to have doubts. He said he saw an officer hit a subordinate, and soon found that the atmosphere of supervision through intimidation was affecting him.

In Johannesburg, officials made the church look busy for publicity photographs by filling it with Sea Org members, the Collbrans said. To make their numbers look good for headquarters, South African parishioners took their maids and gardeners to church. But the Ideal Orgs are supposed to be self-supporting, and the Johannesburg church was generating only enough to pay the couple $17 a week each, Mr Collbran said.

"It was all built on lies," he said. "We're working 16 hours a day trying to save the planet, and the church is shrinking."

When Mr Collbran decided he wanted to leave the Sea Org, he was sent to Los Angeles, where potential defectors are assigned to do menial labour while they reconsider their decision. Ms Collbran remained in Johannesburg, and for three months the church refused to allow them to contact each other, the couple said. They then went through hours of special auditing sessions called "confessionals". The auditors tried to talk them out of leaving, and the Collbrans wavered.

The couple went back to work for the church in Los Angeles, but Ms Collbran found the atmosphere so oppressive that she likened it to living under "martial law" and again resolved to leave. So she intentionally conceived a child. She knew that the Sea Org did not allow its members to have children, and she had known women who were removed when they refused to have abortions. She waited until her pregnancy had almost reached the end of the first trimester to inform her superiors. It still took two months before the church let the Collbrans go, in 2006, and not before making them sign affidavits.

Ms Collbran says she still believes in Scientology – not in the church as it is now constituted, but in its teachings. She still gets auditing, from other Scientologists who have defected. Mr Collbran wants nothing to do with his former church. "Eventually I realised I was part of a con," he said.

The church of Scientology says the defectors are lying. 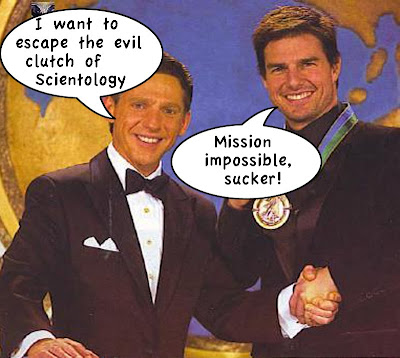