Having already publicly apologised for opposing the appointment of the Revd Dr Jeffrey John as Bishop of Reading in 2003, the Rt. Reverend James Jones has now used his presidential address at his diocesan synod this year to call for an "agree to disagree" policy in the Church of England in respect of sexual ethics.

It's an okay speech. In fact, it's great coming from such a high ranking evangelical. But, although he has definitely helped the situation as far as gay people in England are concerned, I think he is naive in his thinking. Personally, I don't think there is much equivalence between agreeing to disagree on pacifism and agreeing to disagree on sexual ethics. You see, other than possibly when our country is being invaded, it is no problem at all to have a pastoral relationship with a priest who has a different take on just war theory to yourself. But, if you are gay, and your vicar believes, and maybe even preaches, that you are a vile sinner destined to be frazzled big time in the style of the citizens of Gommorah, it is impossible to rely on him (or, just possibly, her) for help on pastoral matters or to take what he preaches from the pulpit seriously. Okay, we could sort ourselves at the local level into inclusive and homophobic congregations (although this would be problematic in rural areas) but when you get up to church offices such as rural dean, archdeacon and bishop, things start getting far too complicated. We are back to having to consider two distinct churches in the same geographical area, with their own hierarchies.

The Bishop of Liverpool, The Rt Reverend James Jones has used his presidential address to the March synod of the Diocese of Liverpool to call for Anglicans to “accept the diversity of ethical convictions” in the debate on sexual ethics so that “we will let nothing deflect us from mission” In his address the Bishop made comparisons with the history of the just war theory and the ethics of pacifism. He talked about how “we handle disagreements about ethical principles within the body of Christ” and will say that the need to allow a diversity of ethical convictions should mirror the way that the church “has always allowed a diversity of ethical stance on taking human life”. The Bishop said that “on a number of major moral issues the church allows a large space for a variety of nuances, interpretations, applications and disagreements”.

The Bishop proposed that we can move “towards allowing a variety of ethical conviction about people of the same gender loving each other fully” and that he believes “the day is coming when Christians who equally profoundly disagree about the consonancy of same gender love within the discipleship of Christ will in spite of their disagreement drink openly from the same cup of salvation.”

I have posted the bishop's full address at FOOTNOTES. 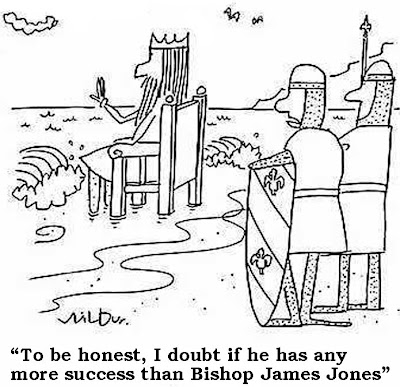 PEDANTS PLEASE NOTE: I am fully aware that there appear to be two Norman knights with the Viking, King Canute (Cnut if you are a pedant). Blame the cartoonist who I nicked the picture off - he's probably American and thinks that the Vikings came from Minnesota.