On Friday nights, gay Catholics from across Sydney attend St Joseph's in Newtown. Like all Catholics, they take Communion during mass and tea after it. They have done so for years, with the quiet support of the deeply conservative Archbishop of Sydney, Cardinal George Pell.

But this week St Joseph's gay ministry was threatened by a Catholic group set up on Facebook who vowed to stop its ''sacrilegious gay masses''. Last night the group protested at the church, bringing attention to this small forum of compromise forged between the doctrine that condemns homosexuals' sex lives and the faith they love.

St Joseph's priest, Father Peter Maher, said ''there is nothing in the Catholic faith that says gays and lesbians don't have rights to take communion''. 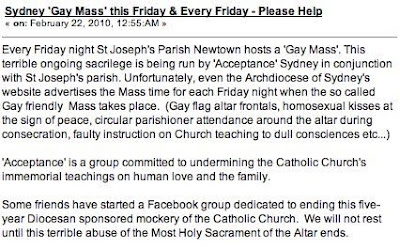 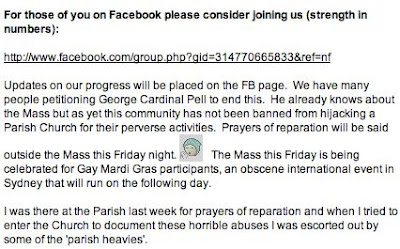 COMMENT: I am, to put it mildly, extremely worried. There is only so much one can do with a pair of lips in the kissing department. Over the last 25 years Mrs MadPriest and myself have done quite a bit of kissing. My great concern is that we might have inadvertently engaged in a homosexual kiss and, therefore, be condemned to an eternity being frazzled in the fires of hell.

So, please, could somebody tell me what a homosexual kiss is exactly? Then I can avoid doing it at all costs. I will also be able to instruct the church wardens at my church to keep a watch at our services to make sure there is none of this vile practice going on under our righteous noses. We must act now or, before too long, there will be homosexual cuddling in our pews and all the married couples in our churches will get divorced and kill their children.