Victims of clerical child sexual abuse and groups representing them reacted with a mix of anger and disappointment to a Vatican statement issued after a papal meeting with Irish bishops.

Marie Collins, who was abused by a Dublin priest, told Catholic News Service that she thought it was "pathetic" that the statement was "so far away from accepting that there was a policy of coverup."

"I wasn't expecting much from the meeting, but the fact that the resignation of bishops was not even on the agenda had been insulting," she said.

Irish bishops visited Rome Feb. 15-16 for a summit with Pope Benedict XVI and senior officials from the Roman Curia. Following the meeting a Vatican statement said "together they examined the failure of Irish church authorities for many years to act effectively in dealing with cases involving the sexual abuse of young people by some Irish clergy and religious."

Christine Buckley, who was abused in a home run by the Sisters of Mercy, said in a statement that the meeting was "an absolute and utter charade from beginning to end."

"It was a pretend slap on the hand from Pope Benedict," she said.

Buckley said she had hoped the pope would announce that he was coming to Ireland to meet with victims of institutional and sexual abuse.

"He has washed his hands of it," she said, appealing to Pope Benedict to include a visit to Ireland in his itinerary when he visits Britain in September. "I really thought he would have said that all bishops who knew about abuses had to resign. And to reinforce this, he was coming to Ireland and (would) meet victims and abusers. But none of this happened. We got absolutely nothing from it." 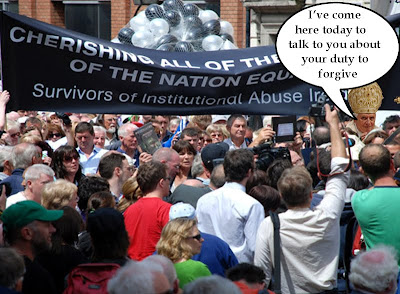 Thanks to WhiteyCat for sending
this report into MadPriest Towers.