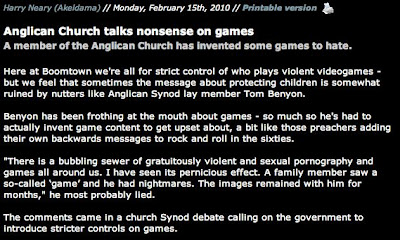 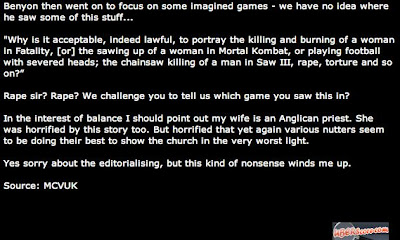 COMMENT: I am, probably, the least qualified male on the planet to talk about video games. I can remember playing "Space Invaders" in pubs when I was a young lad and Mrs MadPriest and myself had a rather pathetic go on a game called "Indiana Jones And The Temple Of Doom" in a seaside arcade about twenty years ago in which the thugees made mincemeat out of us. And, I did have a look at a promo for something called "Doom" that came with a Mac magazine over ten years ago which, as it entailed trying to shoot as many dogs as possible, did not stay open on my screen for more than a couple of minutes.

So, I can't really comment as to whether some of them should be banned or not. I assume that the same rules apply to video games as they do to video films, that they were certified for specific age groups. But I may be wrong about this.

However, there does appear to me to be a difference between video games and films. To a large extent horror films, including slasher films, exist to satisfy the viewer's need to be frightened and, maybe in some cases, to watch bloodshed and violence. I don't know for certain, but it seems to me that violent video games exist to satisfy the player's need to win and, maybe in some cases, their need to commit violence, in the same way that a flight simulator is for people who want to become pilots.

So, I have a similar view of people who get their kicks from violent video games as I do to people who get their kicks from fox hunting. Wanting to hurt is part of the male psyche, as is rape, but most of us rise above and control these base instincts. Pretending to kill is, in essence, of the same level vileness as pretending to rape. I doubt if there are many psychologists who would recommend rapists deal with their pent up sex drive by watching violent pornography, so, maybe it is not a good idea for potentially violent males to deal with their aggression by playing graphically violent video games. But, on the whole I would go for self-censorship rather than legal censorship and encouraging the video "Comic Book Guys" to address their addiction by getting attractive women to go up to them regularly, look at them pitifully and say to them "You, poor, sad loser. Get a life!"