The Roundhead blogs are still claiming that ACNA has been recognised by the C.of E. General Synod and that this synod has been a victory for the right.

This Synod has proved that the centre still holds and is still being supported on many issues by the open evangelical faction. Bearing in mind the Grand Tufti's one way love affair with the haters and his charismatic influence over the clergy in Synod, I am delighted with the way the voting went this week.

ACNA has been firmly told that although it is accepted that they want to have power in the Anglican Communion, the C. of E. doesn't want them to until they learn how to behave like Englishmen.

It looks like one of my greatest hopes, that the English Methodists will be back in the Anglican fold where they have always belonged, and within my lifetime is a lot closer,

And then we have this giant step as reported at THE GUARDIAN: 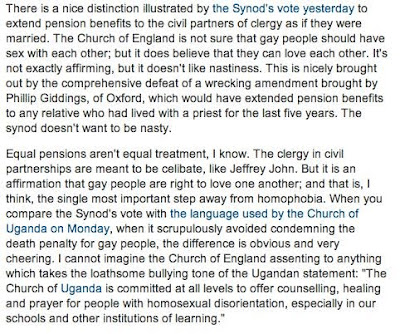 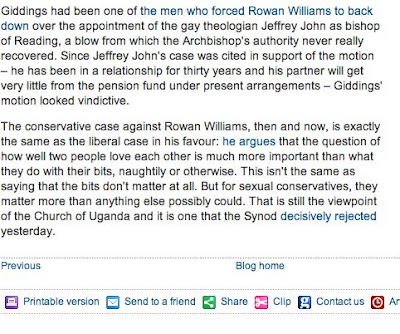 Okay, it might seem a bit lame to those who really would like to be treated like human beings not freaks, but, on the other hand, it has made the argument against gay clergy in my church look even more futile when put up against the truth of how things actually are in the church.