(Thanks to Paul (A) for sending

this story in to MadPriest Towers)

Baltic, the Polish dog rescued from the frigid Baltic Sea after a long journey on an ice floe, is again braving those waters - this time safely onboard the ship that saved him.

Wearing a bright orange lifejacket, Baltic embarked Wednesday on a three day mission alongside his new owner Adam Buczynski, a seaman who pulled him to safety from an ice sheet in the Baltic Sea last month.

Ewa Baradziej-Krzyzankowska, spokeswoman for the Sea Fisheries Institute in Gdynia, co-owner of the ship, said the crew had anti-nausea pills for Baltic in case he gets seasick. She said the crew is also taking other precautions to keep the dog safe and comfortable during the voyage, whose purpose is to collect samples of fish and sea plants for an aquarium in Gdynia. As for answering the call of nature while at sea, Baltic quickly learned that he was to only use one spot on an outdoor deck that gets hosed down regularly.

Buczynski and other crew members spotted the dog Jan. 25 floating 15 miles (25 kilometers) from land. The rescue was difficult because the frightened, shivering dog kept falling into the icy water. Baltic was first seen two days earlier on the Vistula River, 60 miles (100 kilometers) inland, drifting on ice past the city of Grudziadz, where firefighters tried but failed to save him. It remains unclear where or when the dog's odyssey started.

Baradziej-Krzyzankowska said since his rescue, Baltic has shown a fear of water. Several days ago he resisted getting a bath that he badly needed to remove crusted salt from his thick fur. So Buczynski took him in his arms and carried him into the shower.

''They showered together,'' she said. ''This lifted the dog's confidence.'' 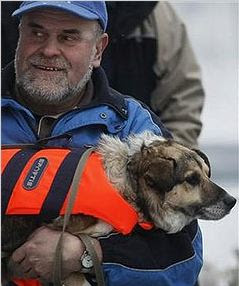 For knowing
exactly what
to do when
a little dog
is scared,
Adam Buczynski
is our...

BRICK
OF
THE
DAY