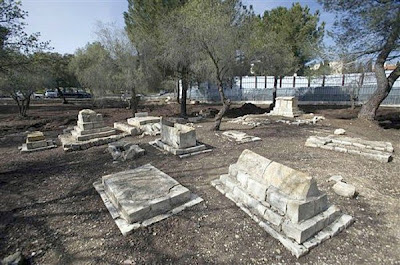 From THE SUN SENTINEL:

Palestinian and international human rights activists on Wednesday petitioned the United Nations to stop the construction of a museum on the site of a medieval Muslim cemetery in Jerusalem, saying it would disturb centuries-old graves.

"We have nowhere else to go," Rania Madi of the Palestinian rights group BADIL told reporters in Geneva, where the petition was filed.

The group said construction of the museum would violate Muslim religious and cultural rights, and such a project would never have been undertaken if the site was home to Jewish graves. At a news conference in Jerusalem on Wednesday to coincide with the filing of the petition, local resident Jamal Nusseibeh said his extensive family is buried at the site. "We have been fighting for this for years to preserve these graves. Its a chain that goes back to 1432 when my ancestor was buried there and it is part of the rich fabric of Jerusalem that is a symbol of tolerance," he said. "So why destroy this to build a museum?" The name of the proposed museum will be The Museum of Tolerance. Exhibits will focus on the twin themes of mutual respect and social responsibility and impress on visitors the need for tolerance toward all religions and nationalities.

Yael Lerer, an Israeli activist who opposes the project, said it was a "very strange joke" to build a museum of tolerance on top of a cemetery.