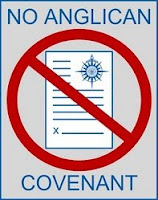 Malcolm has written an excellent
commentary on the current state
of the proposed Anglican covenant,
Go read it at
SIMPLE MASSING PRIEST.