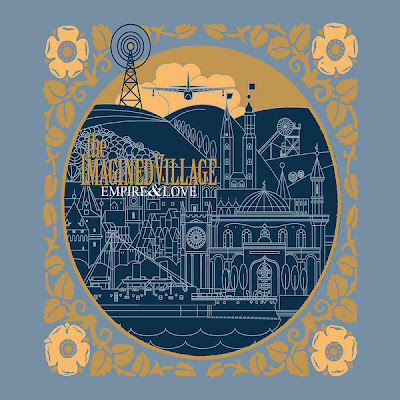 As I have said before (more than once), the most exciting
musical scene in England at the moment is folk music. Not
the touristy stuff or the finger in ear variety that we had to
put up with from the folk snobs in the 60s, but the
uninhibited, brave and experimental music that has been
leading the way over the last few years. It's not an age thing,
although there are plenty of bright, young things snapping
at the heals of the more mature folk rebels. It's more of an
attitude thing. The new folk is not afraid to mix it with other
musical forms but, at the same time, they have gone right
back into the roots of the tradition to rediscover its vulgar
beginnings. The folk of the 60s revival always seemed so
patronising to me. It was lead by a bunch of middle class men
(mainly) who worshipped the idea of the working man. I am
sure there are just as many middle class people involved in
the new folk but they are far less reverential about the
tradition and don't have the same fixation with an idealised
working class. This is understandable as we no longer have a
working class in England, thanks to Mrs Thatcher.
I suppose the buzz word for these performers would be
"fusion." But it is a fusion of equals where each component
retains its own integrity. The tunes in the mix today are from
a collective who call themselves The Imagined Village.
The first track you'll hear mixes an old story with
a modern reality, an old song with contemporary words, and
traditional English folk with music from the newer cultures
that are now part of our society. This is just the sort of
many-culturalism (as opposed to multiculturalism) that I see
as the only way the different ethnic groups now in England
will ever learn to respect each other and all begin to see
themselves as a permanent part of the whole, owning
England as their country, and relating to their countrymen
as their primary societal group.
The second track is about the area of town next to where I
live. I must drive down Byker Hill two or three times a week
(well, the best pubs are at the bottom of it).
The third track is a version of "Scarborough Fair" that really
brings out the fact that it is a tale of revenge - she left him
and hurt him and if she now thinks she can come back as if
nothing had happened she's got another thing coming.
The fourth track is another favourite from the English
tradition and the fifth track in the mix is one for fans of the
seminal, English glam rock band, Slade.
Sit down, kick back, enjoy!