The bigwigs of the Church of England seem to be spending more time in the Houses Of Parlaiment at the moment than in houses of God.

In a Jan 6 statement given to Parliament, the Second Church Estates Commissioner, Sir Stuart Bell, responded to a written question submitted by the member for the Vale of York, Anne McIntosh (Cons.) asking what “steps are being taken to ensure that the stipend for parish priests is sufficient for them to perform their duties?”

Additional grants of assistance were made by the Church Commissioners, via the Archbishops’ Council to provide “additional stipend support to the least well-resourced dioceses,” he added.

The CSA was guided by the “principles of adequacy, flexibility and equitability,” Sir Stuart said, noting that each year it set a National Minimum Stipend and “strongly encourages dioceses to ensure that no full-time stipendiary minister is paid below this level.”

Clergy stipends are set by dioceses and the Church Commissioners, the November 2008 annual report of the CSA said. It recommended that for 2009/10 a National Stipend Benchmark --- the stipend at which most full-time incumbent status clergy should be paid --- of £22,250 and a National Minimum Stipend of £20,230.

COMMENT: This free housing excuse is a bit of a smokescreen. The trouble is we get paid so little money that we cannot afford to buy a house as an investment and as somewhere to live when we are forced to retire (even those who think the private renting out of property is ethical - which I don't). This means that people in secular employment on a wage commensurate to what a post graduate professional should earn, who have bought their own house which will have increased in value, are astronomically better off than a priest on retirement. Okay, many priests come into the priesthood, later in life , with plenty of the world's wealth already in the pockets, and many have wives earning a decent whack. But not all of them. Those of us from council housing and a blue collar background usually have no assets when we sign up.

Furthermore, the Church's reply to Parliament does not give details of the hours priests work - 6 days a week, 10 hours a day on average, often more. I worked out this means our basic wage on average is £3.50, well below the legal minimum wage which we are not entitled to by law because we are employed by God (God employs us but the Church decides how much to pay us - crafty God). 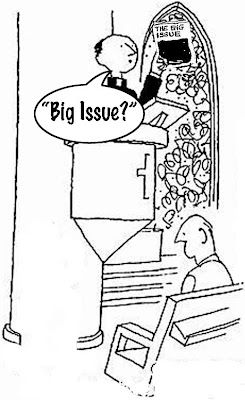 But, as I keep saying, this is the fault of the laity. The bigwigs are only trying to spread out an ever decreasing pot of money. If the English laity were, as a whole (there are of course many generous individuals) , to give to the church just half of what the American laity gives into the TEC coffers, the labourers in their fields could be given the wages they deserve. But this is not going to happen because the laity no longer have any respect for the office of priest. To most of them we are a commodity to be purchased as cheap as they can get away with. Our church cleaner gets a better hourly rate than I do and they wouldn't dare give her the sort of grief they give me. She'd have them in court before they can say "I don't agree with you, vicar."