From THE SAN ANTONIO EXPRESS-NEWS:

Animal welfare groups arrived in Haiti on Saturday to help protect earthquake victims by vaccinating stray dogs and maintaining the health of livestock.

One of the biggest animal-related threats posed by quake is an increased incidence of rabies, said Ian Robinson, of the International Fund for Animal Welfare.

"When you get situations with a large group of displaced people, and hungry dogs wandering around, then you've got the opportunities for dog bites to occur, and that obviously leads to the spread of rabies."

It is also important to maintain veterinary care for livestock, said Gerardo Huertas, of World Society for the Protection of Animals, because families in crisis need them all the more for food, milk, sale and survival.

"The concept of pets is quite foreign to Haitians," said Karen Ashmore, executive director of the Lambi Fund agricultural group in Haiti. "Most Haitians can barely feed themselves, much less a pet."

The Animal Relief Coalition for Haiti will start by vaccinating stray dogs against rabies, said one official. They also will round up dogs to feed and protect them. Stray dogs have been forming packs, sometimes eating human remains.

"There's nothing more difficult to watch than a semi-feral animal eating a human remain," said Dick Green of International Fund for Animal Welfare. "So the people react in the way you would expect them to react — they kill them. They either club them or shoot them or do something to them because they don't want that to happen. And the dog is just trying to survive." 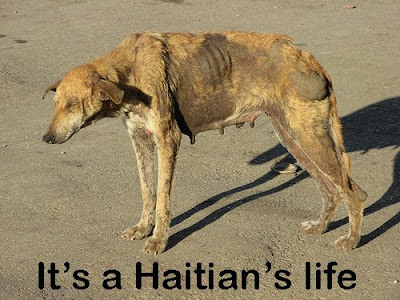