From THE BUDDHIST CHANNEL:

Tokyo, Japan -- Outside the 400-year-old Kyoouji Temple, Kansho Tagai, dressed in his traditional monk robes, paused and began a sutra. He bobbed his head and then broke into a lyrical rap.

"This is an old, old story, a fantasy and longing cosmology. Hey, hey, what's the story about? It's about the Buddha, yo. Hey brother, listen carefully! You got it? No? You don't? Okay, baby, no problem." 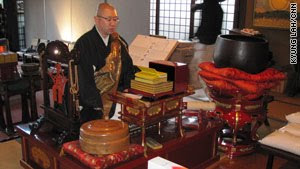 Tagai, or Mr. Happiness, as he prefers to be called, is delivering an ancient message to a hip hop beat. The monk hosts hip hop shows at his temple, drawing young people to a place that is traditionally filled with the elderly. His hip hop message is so popular that twice as many people now visit his temple.

"Buddha's doctrine is a treasure for us. But we're not able to convey his wisdom to the people if we only stick with the old ways. So I try to use a new way to spread Buddha's doctrine. I want to spread Buddhism to the young by using the language they easily understand. Buddhism itself hasn't changed. It's just the way it's presented," Tagai said.