An historic Episcopal church regarded as the “mother church” of Anglicanism in South Carolina will play host to an anti-LGBT conference for orthodox Anglicans this week. The “Mere Anglicanism” event will be held at St. Philip’s Church, Jan. 21-23, and will feature several high profile and anti-gay theologians from across the U.S. It’s theme this year is “Human Identity, Gender, and Sexuality: Speculation or Revelation?”

Diocese of South Carolina Bishop Mark Lawrence has endorsed the event in a letter on the diocese’s website.

“As you know the institution of Marriage and questions of Identity, Gender and Human Sexuality have become intensely debated and divisive issues not only within the Church (and far beyond merely The Episcopal Church and the Anglican Communion), but within the larger culture as well,” he wrote. “For this reason I hope many of us within the Diocese of South Carolina will take advantage of the upcoming Mere Anglicanism Conference held in Charleston on January 21-23, 2010. I have attended this conference for the past three years and have been surprised by how few clergy and lay persons from within the diocese participate or avail themselves of this annual opportunity to hear some of the major shapers of Anglicanism in our day.”

can be read at FOOTNOTES. 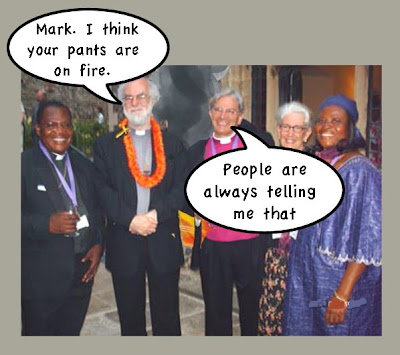