We continue to pray for the people of Haiti. And we pray for those elsewhere who have already received bad news concerning friends and colleagues and those who are still suffering the pain of waiting for news. These include members of our own little community. I know ELIZABETH KAETON has lost friends and that KATHY'S congregation is waiting for news from a sister church in Haiti. There will be others.

The high death toll is down to the extreme poverty of the people of Haiti and the people of the developed world are responsible for that. When I look at the video coming out of Haiti I see Africans. I doubt that they emigrated there of their own accord. Once upon a time somebody forcibly removed them from their own land and put them there to reap obscene profits out of their enslavement. We are not guilty for the original sin but we do inherit a duty of care and restitution. So, how will we handle our guilt for our deliberate sins and our sins of omission? We will congratulate ourselves on our generous response to the relief effort. We will try to offset our guilt by pointing our fingers at the pre-existing problems in Haiti. But civil unrest, gun rule and gangsters come out of poverty not wealth. We could have and should have done so much more to prevent the consequences of the natural disaster. Why do we think Jesus told us to give our coats to those without coats? Do we think his words were a metaphor telling us to give more money to the rich, the usurers,
the CREDIT CARD COMPANIES?

Posted by Themethatisme at PEN AND PAPER:

Dear all, husband here. I'm afraid her ladyship is rather unwell at the moment and occupying the bedroom with great wailing noises. I shall offer what tender ministrations I can over the next few days and hopefully she will be back soon.

Posted by Gail at KNOW YOUR "IT'S":

Today I had to share one of my intuitions with one of my daughters. I was quite frightened because no one really wants to hear the truth, or in this case, my intuition of the truth. I was very happy she listened - and she also agreed with much of what I felt and thought AND she is aware from within her own intuitive self of one particularly tragic possible scenario happening if interventions are not initiated and put in motion. Her struggle is that she feels her hands are tied and that she has done all she can do to "run interference" and that t he "system" is such that until tragedy strikes her shared concerns are dismissed. Regardless of her position, truthful or not, I spoke from my heart. I put my intuitive fears out on the table and offered to be part of any further initiation for interventions she chooses.

That is the best and the most I can do. Meanwhile - I will hold her close and pray she moves forward knowing that she is not alone. And So I place her as well "In The Arms Of The Angels"

Posted by Dino at ADVENTURES WITH GOD: 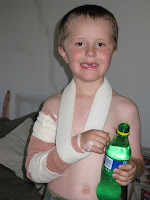 We were just off for a walk with Rose when Joel put his arm through the gate moments before it opened. Ouch!

Having managed to get the mangled arm out of the gate Daddy bundled him into the bakkie and shot around to the medi-clinic where we were seen immediately. Thankfully the medi-clinic is a stone throw from our house.

We were whisked off for an Xray (see left) which showed a fracture in his right upper arm. Thankfully the fracture is only on one side of the bone so it should heal well and quite quickly.

It seems odd to talk about celebrating a new ministry when I've been with these people for three years already. But later this afternoon (Sunday), we will have a Celebration of a New Ministry and I will be inducted as the new incumbent of the parish where I currently hang my biretta.

It certainly wasn't something I had planned, even when I re-entered active ministry a few years ago. Vocation is a funny thing - and often the only way to test a vocation is to try and walk away from it. In this case, it pursued me - to the point that one wise priest advised me to "get to Ninevah before you end up in the belly of a fish."

Your prayers are requested.

My nephew Peter was away on a teen ski trip and sustained a head injury. He is still unconscious, is intubated, and is being sent by helicopter to the trauma center in Green Bay.

I covet your prayers for him and for his family.

Posted by Sharecropper at

Yesterday I attended a funeral at my former church in Winston-Salem - St. Anne's. I had returned to that church only once - to bury my god-son, Bill, a Vietnam Vet with COPD and a few years older than me. Now I returned to bury a friend, lost some years ago to Alzheimer's.

I cried. I cried for my own loss. And, in psychological terms, I processed a pain so that I can move along. My spiritual development was arrested when I fled; now I begin to feel the presence of God again. My lack of perception has been replaced with a quiet comfort and a gentle jogging: "Okay, back into the evangelism business, back into the pastoral care business." I call it business - because it is a busy-ness instead of the inertia of fear of being rejected, fear that I have failed.

Now the time is near for doing justice, assisting God in making the divine mercy recognized. I will walk humbly with my God as I have done before, but I will add doing justice and loving mercy as I am physically and emotionally able. Thanks be to God.

Posted by Kathy at

KNITTING WITH MY SHOES OFF:

I'm still in a sleep deficit: two whole hours last night. I managed to just doze off when I woke up from pain. It takes a while for the tramadol to kick in so I was gritting my teeth and being very restless for a couple of hours. I didn't want to take two of them so I just waited it out. Eventually I felt the pain ease off and I was able to doze off. And the cat decided to wake me up at least three times wanting to curl up in my arms. The last time was 8 minutes before the alarm went off. I'm resigned to interrupted sleep the rest of my life.

And finally, a Thanks Be To God item:

Posted by Kevin at A VIEW FROM THE EARTH:

Today at the Bishop's Committee meeting at Church of the Saviour in Clermont, Iowa, we received some very good financial news. It seems that the total amount of pledges has risen by over 26% as compared to last year. It is truly a Godsend to be part of a small but growing congregation that doesn't have to worry whether there will be enough money to keep the lights on and the toilet flushing. 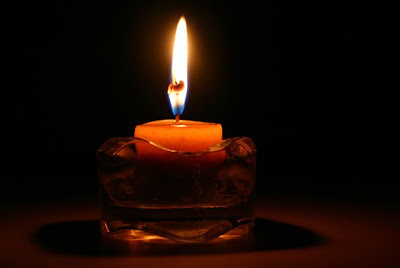