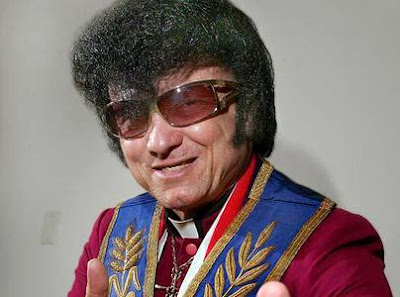 From THE STAR (Canada):

In a Newmarket veterans' hall, that stands in as a church, Archbishop Dorian Baxter has channelled the King of Rock `n' Roll each Sunday for the last seven years. On Sunday, an eclectic mix of more than 300 people gatheredto mark the breakaway Anglican church's anniversary and celebrate what would have been Elvis's 75th birthday on Jan. 8.

But as Baxter, who also performs as impersonator Elvis Priestley, is quick to point out, the main reason they assemble in the Spartan surroundings of the Royal Canadian Legion hall is to praise God.

"We honour Elvis's commitment to the Lord. Like Elvis, the King of Rock 'n' Roll, we worship Jesus, the King of Kings," said Baxter.

It was Baxter's Elvis act, his long sideburns and big black pompadour that got him in trouble with Anglican Church bishops in the first place. He was removed from his parish in 1998 and stripped of his right to perform marriages. After battling the church hierarchy for years, he formed Christ the King, Graceland Independent Anglican Church in 2003. Anglican bishops gave his fledgling church just a few months, but Baxter's congregation has continued to grow.

"It's deeply religious, but it's fun, too. It's not all about sinning and repenting, it's uplifting. The reverend is amazing. I smile all the time," said Teni Stevens, who has travelled from Brampton to attend the services for four years.

Each service features an Elvis gospel warm-up with Baxter performing one or two of Presley's gospel tunes to get the crowd in the mood for prayer. Sunday's service also had an organist, a couple on keyboard and guitar, and a bagpiper. The congregation included a section of ladies from the Red Hat Society, war veterans and several children, who were called to the front to receive a multicoloured lei from Baxter as a remembrance of Elvis and "the colours God brings into our lives."

Baxter even managed to squeeze in the ordination of two new ministers and a talk by native Indian leader David "Grey Eagle" Sanford into the three-hour affair.

Baxter's church sponsors a breakfast program, Christmas hampers and 92 orphans. He said he thinks Elvis would have liked that. He's also made peace with the main body of the Anglican Church, but has rejected offers to rejoin it.

COMMENT: Yes. Not my cup of tea. But, why not? Unless somebody can show me that this crazy priest is doing more harm than good he'll remain a chart topper as far as I'm concerned. 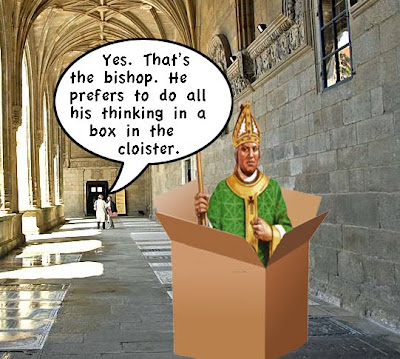