It is rare for me to side with the former Archbishop Carey and I don't agree entirely with what he has to say about immigration. But, at least, he is trying to get the subject talked about openly which is something that I've pushed for many times on this blog. Bishop Packer's attempt to shame him into silence is also a prime example of how our freedom, in my country, to discuss controversial issues (e.g. anything that might lose the government votes) is deliberately curtailed by those in authority by the political correctness they have instilled in our society over the last 40 years or so.

My stand point on this issue is clear. Keeping stum about immigration, an issue that is of major concern to the "silent masses," may keep the lid on things temporarily, but in the long run leads to frustration and, in the end, possible violence. It is much better to allow everybody to talk openly about what worries they have without fear of censure. This might be unpleasant to begin with but should hopefully lead to everyone involved understanding each other better and, maybe even, all groups concerned learning to willingly (not because they are forced to) accommodate each other and respect each other's grievances as being valid.

From THE MORNING STAR:

The Bishop of Ripon and Leeds the Right Rev John Packer said the views of Lord Carey and the parliamentary cross-party group on balanced migration could lead to a lack of tolerance and welcome towards asylum-seekers. He added that the emphasis should instead be placed on issues surrounding poverty and unemployment in the run-up to the general election.

Bishop Packer was speaking after 19 MPs and peers, including Lord Carey, backed a call for all the major parties to make a commitment in their general election manifestos not to allow Britain's population to reach 70 million.

He did not "believe Lord Carey or the group are racist but their approach can play into what becomes a racist opposition to people who are not from a white, Anglo-Saxon background. The sorts of concerns they raise can lead to a lack of tolerance and welcome towards those seeking asylum. I believe we ought to have a culture of hospitality towards asylum-seekers," he said.

Earlier this month, Lord Carey said he was not calling for a ban on immigration into Britain but warned that, if concerns were not addressed, it could play into the hands of the far-right British National Party. 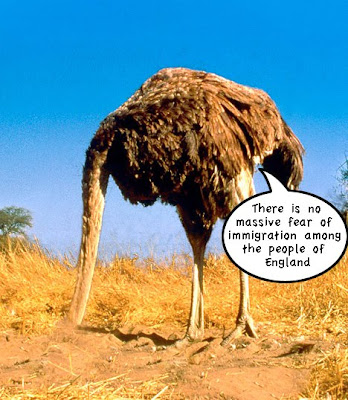