The Reverend Canon Dr Alison Peden, has failed in her bid to become Bishop of Glasgow & Galloway in the Scottish Episcopal Church. The job went to the local candidate, Dr Gregor Duncan, rector of St Ninian's Church, Pollokshields, Glasgow, and dean of the Diocese of Glasgow & Galloway. The third candidate was Dr John Applegate, an "academic."

COMMENT: This would not have been a diplomatic decision as the Scots just don't care about such things. If there was politics involved it would have been at an inter-diocesan level as Canon Peden is a big noise in the St. Andrew's diocese, whilst Dr Duncan is a big noise on the home team.

But, respect due to Alison. Being the first is never easy. If she had got the job she would have been assailed by malicious mutterings that she was only chosen because she was a woman. Because she hasn't succeeded, as a high profile failure, she will find it difficult to get shortlisted for future episcopal posts. But the Primus, the Bishop of her diocese, is a good bloke (he's just done an excellent interview on the BBC - very confident, non-apologetic and in control) and a mate of hers, so she will be supported and encouraged.

Personally, from the photographs alone, I'd have gone for Dr. Applegate. The other two have a hungry look about them, if you get my drift. 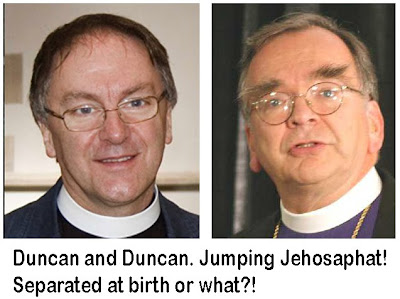