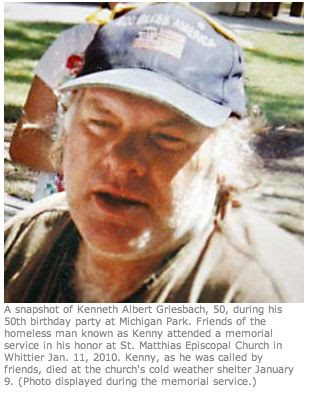 From THE WHITTIER DAILY NEWS:

He wasn't a City Council member, or a well-known county administrator, yet close to 60 people from different walks of life gathered in tiny St. Matthias Episcopal Church on Monday to honor the memory of 50-year-old homeless man Kenneth Griesbach.

It was discovered that Griesbach, who had been residing in the church's cold- weather shelter, was dead when residents awoke on Friday morning and he couldn't be roused. Those who knew him said the man had been in poor health for years.

"He was a big guy and had bad knees. He was using a walker," retired Pastor Bill Miller said. "Our health system didn't come through for him."

Longtime friend David Hickey, 54, said Griesbach had applied for Social Security benefits after the book bindery he worked in closed down two years ago.

"They told him his condition wasn't serious enough to receive Social Security. I feel personally that the system failed him," Hickey said.

According to friends, Griesbach dealt with congenital heart failure, sleep apnea and diabetes - conditions no doubt exacerbated by his big appetite and smoking.

"He never complained about his health issues. He always had a smile on his face," friend Robin Friedrich, 56, said.

Following the service, friends and church members gathered in the adjacent courtyard to exchange stories about Griesbach over punch and cookies and Sprague offered his reflections on the man who inspired such a sizable turnout.

"The only time I saw him grumpy was when we didn't have enough doughnuts to go around. He was a big emblem that the homeless have community relationships as worthy as any relationship on the planet," the Rev. James Sprague said.
As the reverend bid farewell to Friedrich, she fought back tears.

"I miss him so much," Friedrich said. 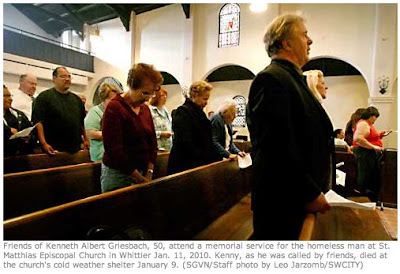 COMMENT: We do have homeless people in England. They fall into three main categories: runaways (young and old), addicts and the mentally ill. I would be lying if I said that some of them don't fall through the cracks in our system, especially the young and especially if bad people get to them first. But, on the whole, to be permanently homeless in England requires a person making some deliberate and disastrous lifestyle choices, such as deciding to spend all your social security money on cheap cider. Furthermore, there are many agencies out there, both state run and charitable, that are dedicated to helping the destitute and enough year round hostels to shelter any homeless person who doesn't choose to live on the streets.

Therefore, the idea of somebody being homeless because they have lost their job and being allowed to remain homeless with such a list of disabilities and illnesses is both alien and abhorrent to me. The nanny state can be infuriating at times; it creates too much red tape and can discourage initiative. But I's rather be nannied by my government than left to die.

Americans seem to think that the state is something separate from them. But, of course, the state is them. Okay, governments have a tendency to gather too much power to themselves and abuse that power. But in an advanced democracy it's down to the laziness of the voters if they get away with it. The irony is that Americans choose to rely on private enterprise for their security and welfare. Nowadays, such institutions are often international and less American than the State so many regard as somehow alien. Go figure!

For understanding the true meaning of community even though his community couldn't give a toss about him, Kenneth Griesbach is our:
BRICK OF THE DAY