An artist has stunned a church congregation after creating this giant replica of the Crucifixion - made from 153 slices of burned toast. Adam Sheldon, 33, designed the unique piece of art six months ago at the request of his mother who worships at the Anglican Church of St Peter, in Great Limber., Lincs. 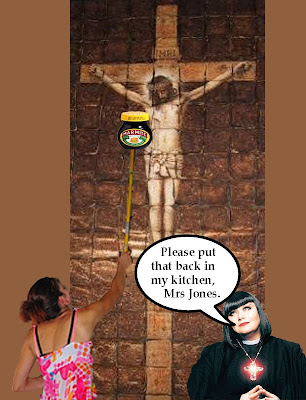 Using his toaster, artist Adam, burned every piece of bread before drying them out and flattening them so they were ready to be positioned in a giant frame. He then spent hours scraping the toast with a knife to create the lighter parts of the image, such as Christ's halo, and a blow torch to create darker patches. His Crucifixion picture now measures six feet (1.8m) by three-and-a-half feet (1.1m) and was mounted on the wall of St Peter's knave (sic) on January 30.