Pope Benedict on Tuesday linked the Church's opposition to gay marriage to concern about the environment, suggesting that laws undermining "the differences between the sexes" were threats to creation. The pope made his comments in an address to diplomats in his yearly assessment of world events. The main theme of the address was the environment and the protection of creation.

"To carry our reflection further, we must remember that the problem of the environment is complex; one might compare it to a multifaceted prism. Creatures differ from one another and can be protected, or endangered, in different ways, as we know from daily experience. One such attack comes from laws or proposals which, in the name of fighting discrimination, strike at the biological basis of the difference between the sexes. I am thinking, for example, of certain countries in Europe or North and South America. Yet freedom cannot be absolute, since man is not God, but the image of God, God's creation. For man, the path to be taken cannot be determined by caprice or willfulness, but must rather correspond to the structure willed by the Creator," he said.
COMMENT: The violence of this bloke is incredible. To be honest, he might as well pop down to Uganda and put the noose round the neck of the first gay to be sentenced to death, himself. Because his bigoted, unscientific, magical thinking will be lapped up by the animist death merchants of that vile land and used to endorse their evil and superstitious legislation.

It makes me sick. A parish priest in England suggests that people without any money should shoplift rather than starve and he is lampooned and critisised throughout the world. Benedict's lies kill millions in Africa and sentence millions of gays to a future of homophobic bullying and the world's diplomats politely sit there and say nothing. 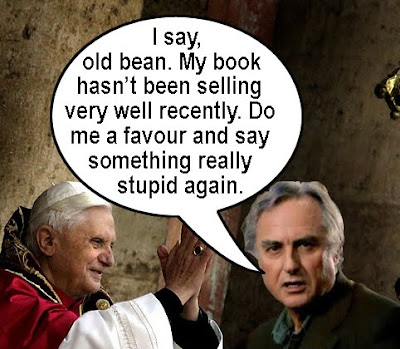