A 23-year-old British woman on holiday in Dubai told police she had been raped, only to be arrested herself for having illegal sexual intercourse.

The woman, who is said to have accepted her boyfriend's marriage proposal during a three-day break, admitted drinking too much alcohol as they celebrated at Dubai Marina's Address Hotel. The waiter is then said to have followed her into the toilets and raped her while she was in a state of semi-consciousness.
After her fiancé found out about the attack, they contacted police, but they were questioned about breaking the country's strict rules. She was then made to give a blood test to prove she had been drinking, and only was given access to proper medical checks following an appeal from the British embassy.
A cellmate of the woman told The Sun: "She's a British girl but a Muslim, so I think they were tougher on her because of that. She was trying to report the rape but soon realised the policemen were more interested in how often she has sex with her boyfriend."
Her attacker is believed to have denied rape, claiming she consented, but he has also been charged with "illegal sex".
The couple from London are now reportedly on bail and understood to be awaiting trial after having their passports confiscated. Should they be found guilty, they could face up to six years in jail.
From ANANOVA:
Wootton Bassett is preparing to honour two more fallen British soldiers as a controversial Islamic group pressed ahead with plans for a march through the town. Islam4UK said it would apply to police "in the next few days" to march through the Wiltshire town famous for honouring dead British troops, despite calls for it to be cancelled. Hundreds of people will line the streets on Tuesday to pay their respects as the bodies of Rifleman Aiden Howell and Sapper David Watson are driven along the High Street.

Anjem Choudary, leader of Islam4UK, said it was "full steam ahead" for the march, which is part of a campaign for the withdrawal of British troops. A date for the event - to feature 500 people carrying symbolic coffins - has not been set but it will not coincide with a repatriation, Mr Choudary said. Islam4UK, a branch of the extremist al-Muhajiroun movement, claims its "momentous march" will honour the thousands of Muslims who have been killed in Afghanistan.

But politicians, civic leaders and mainstream Muslim groups have questioned the need to hold the protest in such a sensitive place.

COMMENT: This isn't a protest. It's an act of aggression.
The people of Wootton Bassett and old soldiers from previous wars, line in up along their high street every time the body of a soldier, is brought through their town. This was not an organised thing. It was just something that happened as the people of the town coped with being on the route of the bodies coming from the airfield. It is not jingoistic. It is silent, a mark of respect for the fallen.
Of course, British people should be allowed to demonstrate against the war. But any such demonstration should be in places where there are people responsible for the war or in the centre of our cities. The people of Wootton Bassett are not responsible for the war. They are, in fact, responsible for making sure the rest of us see what war does to young people. They should be allowed to do this without being antagonised by a bunch of politically motivated people who don't appear to have any respect for anybody who doesn't hold to their religious views. In this they are no different to the Phelps Clan in the U.S. 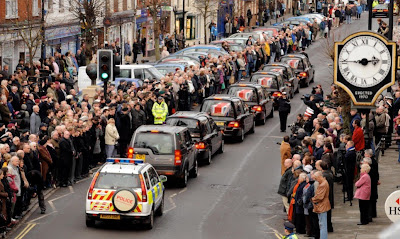 From THE GADSDEN TIMES:

Firebombs were thrown at two more churches in Malaysia early Sunday and another church was splashed with black paint, the latest in a series of assaults on Christian houses of worship. Four other churches were hit by gasoline bombs on Friday and Saturday, as well as a convent school.

The dispute is over a Dec. 31 High Court decision that overturned a government order banning non-Muslims from using the word "Allah" in their prayers and literature. The court was ruling on a petition by Malaysia's Roman Catholic Church, whose main publication, the Herald, uses the word "Allah" in its Malay-language edition. The government has appealed the verdict.
Hundreds of worshippers whose parish church was partly gutted in a firebomb attack last week gathered at a makeshift prayer hall for their Sunday service and called for national unity and an end to violence.
From NEW KERALA.COM:
Renewed fighting was reported in the Egyptian city of Nagaa Hamadi Friday evening, the same day police arrested three suspects in connection with a drive-by shooting outside a church earlier this week. The renewed violence left significant damage in the city centre, reported witnesses, coming on the heels of violent clashes throughout the day Thursday between the police and massive crowds of Christian residents that left mosques and stores damaged. Periodic rioting had already been reported earlier Friday by angry Muslim residents who attacked predominantly Christian neighbourhoods of the town, smashing Christian-owned shops.

Friday evening's fighting reportedly began after a group of about 200 Christians gathered in front of their church to shout slogans denouncing local security forces, saying those forces did not adequately protect Christians and treated them as second class citizens. Earlier in the day, police had arrested the suspects from Wednesday night's shooting after negotiations for the suspects to give themselves up peacefully, a source said.

On Wednesday night gunmen opened fire on Christians leaving a Coptic Christmas Eve mass in the town of Nagaa Hamadi, some 650 kilometres south of Cairo. The attack left eight Christians and one Muslim policeman guarding the church dead.

Sectarian relations in the town have been tense since Muslim residents rioted in response to the rape of a 12-year-old girl, allegedly by a Christian man.
AND FINALLY...
Yes, I know I mentioned "good" in the title of this post and I have, actually, managed to find some good news involving Muslims.
From THE DETROIT NEWS:
A large number of Muslims, Arab Americans and Nigerian Americans are standing together today outside a federal courthouse to condemn the alleged actions of a suspect accused of trying to blow up a Detroit-bound Northwest flight on Christmas Day.

Ali Fawaz, 30, of Dearborn held a sign today that read, "Not in the name of Islam," as he joined about 100 other demonstrators.

"I came out to show I'm against it (terrorism)," Fawaz said. "We're tired of Islam being hijacked."

Nigerian American Remigius Obi of Ann Arbor was also among the crowd. He held a sign that read, "Nigeria condemns terrorism. Nigerians disown Umar Farouk Abdulmutallab. Nigeria says sorry to America & the world."
"I'm here to tell the world that Nigerians don't support terrorism," Obi said. "Terrorism is not part of Nigerians' culture. We love America. We love life."
Earlier today, a group of Imams and other local Muslim leaders also condemned Islamist extremists and the Christmas Day attack. Ten Imams held a news conference at the Michigan Roundtable for Diversity and Inclusion offices in Midtown to condemn extremists and terrorists.
"Muslim Americans want to make it clear that Islam stands for life, not death," said Victor Begg, chairman of the Council of Islamic Organizations of Michigan. 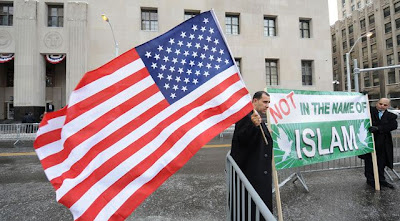