In a stark message, Lord Carey said the Church of England needs to be "tougher" and more outspoken in preserving its beliefs. It came as he said migrants wanting to come to the UK should respect the country's Christian heritage and warned the country could be in "deep trouble" if immigration and population keeps growing at the current rate.

Lord Carey said: "I think we need a tougher Church. We Christians are very often so soft that we allow other people to walk over us and we are not as tough in what we want, in expressing our beliefs, because we do not want to upset other people. We have got to be more outspoken."

He said: "I worry about my grandchildren. I want this country to carry on being one that values the Christian heritage, but most of all values the democratic standards and all that this country has fought over. It has been a battle – when you think, it has only been in last 100 years that the average man or woman has received the vote, so it has been a tough struggle. Our values therefore are very important to us, we want other people to recognise that and to be committed to it as well."

He warned that if concerns about the level and nature of immigration were not addressed, it simply would play into the hands of the far right British National Party. 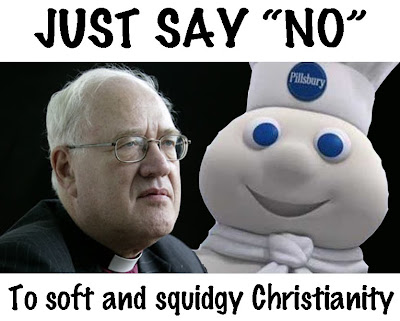