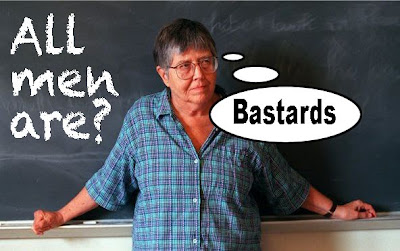 The theologian and philosopher, Mary Daly has died, aged 81. THE GUARDIAN has an obit. that is brief and reasonably accurate and I'm sure there are weightier tributes around the media this week.

It must say something about the liberal indoctrination of my generation that although I know the term for a woman hater (I should do, I'm accused of being one every time I say something negative about a woman who isn't a Republican and when I crack a joke about them that even sniffs of containing a stereotype), I do not know the term for a man hater. Whatever, Mary Daly was one and this created her genius and all her flaws.

I can see how very important she was from a Hegelian point of view. When she hit the headlines in 1968 her uncompromising attack on all things male was absolutely necessary. But, as the feminist thinkers who followed her started to put forward more subtle critiques of mankind and humankind, her refusal to see the male ego's place in relation to women in anything but black and white terms (where men were always painted black) made her an anachronism within 10 years of her initial fame. One thing I have never been able to see the point of is women only groups and Daly went all the way to resigning her professorship on her insistence that no men should be allowed in her classroom. This led to her being a counsellor rather than an educator.

At the end of the day Mary Daly identified the evils of men and then proceeded to invent a female mirror image of them. In their own way her female gods were as exclusive and cruel as the male gods she proclaimed had usurped them.

However, it is extremely possible that without Mary Daly all the women who visit this blog to accuse me of misogyny would never do so. They would be too busy hoovering the lounge so it was nice and tidy for their husband when he came home from work.

So, well done, Mary. Someone had to do it. And you took up that challenge with integrity and a life long commitment that is rarely seen nowadays in our commercial sector and catholic Church sponsored halls of learning. 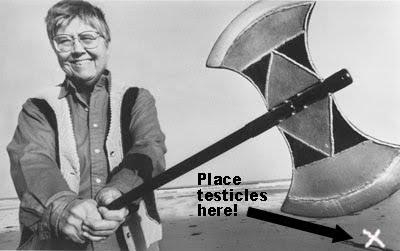