Mt. Harmony, a church founded in 1876, is now home to more than one congregation. One fills a church roll with about 125 names, and is predominately African-American Methodists. The other includes about 35 guests, predominately older, white Episcopalians.

“We were glad to be able to help the Episcopal church,” said Mt. Harmony pastor Marvin L. Caldwell. “They wanted to stay in the area. We know what it is to have a group of people who need a place to worship.”

The Episcopal congregation began 25 years ago but in November, the small group was required to move. The members checked “every church, funeral home, assisted living facility and day care center” on S.C. 49 in Lake Wylie for a place to hold service. But there were always concerns, like the church seemingly on board with hosting the group until the issue of wine – used in the Holy Eucharist weekly – created a “deal breaker.”

But despite different denominations, worship styles and backgrounds, the leadership at Mt. Harmony sees no reason not to allow a few dozen Episcopalians the use of their building.

“It's something good for the community,” said Anthony Thomason, chairman of trustees at Mt. Harmony. “I think it shows people in this area and even into Charlotte that there are big things happening down here.”

The congregations pride themselves on easily overcoming what both groups say they've heard - that Sunday mornings may be the most segregated times left in this country, with worship preferences often leading to congregations lacking ethnic diversity. But in Clover, two varied congregations say the only race here on Sunday mornings is the occasional scramble to reset the place for the later service.

“They wouldn't have believed it,” Caldwell said.

COMMENT: What a great story of bog standard people getting together and sorting stuff out. For their down to earth common sense Mt. Harmony Church is our... 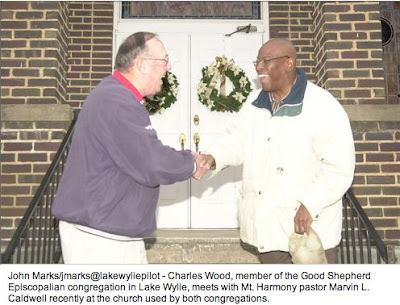 POSTSCRIPT: I just love the navigation bar at the top of Lake Wylie Pilot website: