Very early on in the life of OCICBW... we came to the conclusion that the second to top reason* that there was a lot of opposition to the idea of female bishops in the Church of England was that most of the ladies who had achieved episcopal status in other, more enlightened, provinces, although not being exactly bad-looking or anything, did have the look of the spinster schoolteacher or professor of marine biology about them. So, as a public spirited organisation, we immediately sought to remedy this situation and get the red-blooded heterosexual males of the English Church (and accidentally, the lesbian contingent, as well) on message by launching the OCICBW... Search For Bablelicious Bishops. We were looking for female priests in lowly orders who, simply because of their gorgeous looks, could be fast-tracked to the top jobs where, because being a bishop isn't exactly rocket science, they could just sit there looking pretty. We believed that, because of the overall ugliness of our present bunch of male bishops, these ladies would soon become very popular with even the most "traditional" minded Anglo-Saxon man in the pew.

We found lots of stunners, very quickly. It's not just ugly birds signing up for the priesthood in today"s Church. And they're still turning up. In fact, I came across a real contender today in an article published in the Bermudan, ROYAL GAZETTE newspaper. 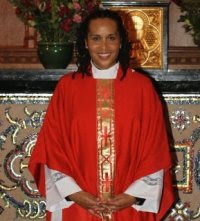 Ladies and gentlemen, meet the Reverend Joanna Hollis, who scores a massive "Yabba! Yabba! Yabba!" on the MadPriest patent Babeometer.

From the article:
Bermuda's first female Anglican priest has spoken of the "significance and importance" of her groundbreaking new role.

Reverend Joanna Hollis was ordained in Santa Barbara, California on December 10 and has joined her father, Archdeacon Emeritus, Arnold Hollis in becoming an Anglican priest.

The Anglican Church of Bermuda only this year overturned 400 years of tradition and voted in favour of women clergy on the Island.

Rev. Hollis obtained a Masters in Divinity from the Church Divinity School of the Pacific in May and in June, was ordained as a Deacon in the Episcopal Church of United States.

She is now Associate Rector at the Trinity Church where she was ordained into the Priesthood. 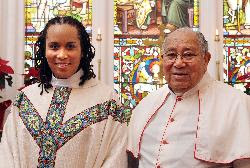 Rev. Hollis spoke at her father's church, yesterday morning, in what is deemed to be the first time a woman has preached there.

"I preached about spiritual blessings. Basically I talked about God's love and grace is all around us and if we pay attention to what God is doing around us then we can recognise this love and this grace. I spoke about the spiritual blessing in Ephesians and I kind of compared that to the blessings of my mother."

And I'm sure she preached very well. But the main thing is, the men in the congregation had something nice to look at.

I will be sending her details to our House of Bishops. A few of them are straight and I hope they will contact her soon with a view to making her England's first episcopal babe.

*The main reason is that the Church of England still has a powerful, gay, Anglo-Catholic misogynist lobby. It's an English thing that is due to loving one's mother too much whilst hating her at the same time.