Workplace bullying of the clergy has become "rife", according to the union Unite which says priests are being picked on by bishops and parishioners. The union has set up a hotline where the clergy can report abuse, and says it deals with up to 150 cases a year.

"Bishops have got a lot nastier", says the Reverend Gerry Barlow, chair of the faith workers branch of Unite. Bullying frequently comes from superiors within the church who may be under financial pressure.

"A bullying case can go on for a long time", says Terry Young, a former minister who runs the helpline. "They're picked on for everything they do wrong, so in the end the person runs around terrified. You see these people unsupported, driven into depression and a nervous breakdown."

Mr Barlow said: "Bishops can treat people shamefully. The most common experience is a priest gets called in for a pastoral chat, to 'see how things are going', within half an hour he's telling you he's going to fire you or take your licence away".

Parishioners can also carry out the bullying, according to Unite, citing the case of a priest in rural Worcestershire who claims he was driven out by a campaign of hate.

The Reverend Mark Sharpe resigned in October as rector of Teme Valley South saying he was picked on by members of his community after he tried to tackle financial problems within the parish.

"It started with the tyres getting slashed, ended up with a dog mysteriously dying, the car being smeared with excrement, and broken glass across driveway. There was intimidation, people swearing at you. A month ago I had the lights pulled off the car," Mr Sharpe said.

The Bishop of Worcester has refuted claims by Mr Sharpe that his parish was "toxic" calling the allegations "dreadful". The Diocese declined to comment further, pending a hearing to consider the allegations later this year.

When Archbishop of Canterbury Dr Rowan Williams was asked about the issue of bullying at a recent TUC conference, he admitted there was a problem.

"The question of bullying, I'm glad you raise it because I think that's unfinished business for us and I'm very glad that it's flagged up," he said.

The union says priests are vulnerable, because they are classed as self-employed office holders, which means they are exempt from the protection offered by employment law. This means they cannot claim unfair dismissal, or seek protection under health and safety laws. 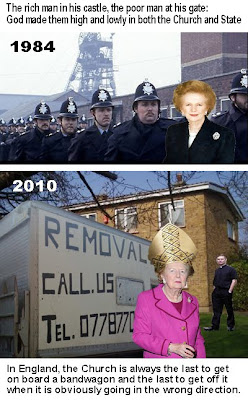 COMMENT:
Although over 30% of OCICBW...'s readers are based in England, they rarely comment, for obvious reasons. But when they do, and when they email me privately, the correspondence from the priests among them is predominantly about how they are bullied by their bishops and their congregations, and how they have become terrorised into inertia. The Church of England is dying and one of the main reasons for this, in my opinion, is clergy fear. They should be leading their congregations forward in mission and outreach. In stead, they cower in their studies hoping they haven't accidentally upset somebody at parish breakfast or said something in their sermon that might have upset the reactionaries in their congregation.

Since the 1980s, the Church of England has increasingly hired bishops who have a secular, managerial mindset. They are businessmen. This means that the parish clergy no longer have anyone to turn to for pastoral help and support. At the moment, if they are scared of dogs, their only option is to tell it to a rottweiler.