The group Atheist Ireland has launched a campaign against the country's new blasphemy law, publishing 25 allegedly blasphemous quotes from people including Jesus Christ, Muhammad and the Irish Justice Minister.

Under the law that came into force on January 1, blasphemy - defined as publishing or uttering matter that is grossly abusive or insulting in relation to matters held sacred by any religion - is punishable by a €25,000 fine.

"They silence people in order to protect ideas. In a civilised society, people have a right to express and to hear ideas about religion even if other people find those ideas to be outrageous."

The organisation also quotes an exchange between Mr Ahern and Labour Party TD Pat Rabbitte when the Minister discussed the blasphemy law at an Oireachtas Justice Committee meeting in 2009.

“Deputy Rabbitte says that I am close to the baby Jesus, I am so pure.”

Atheist Ireland said this was a case of "an Irish justice minister joking about himself being blasphemed, at a parliamentary justice committee discussing his own blasphemy law, [which] could make his own jokes illegal". 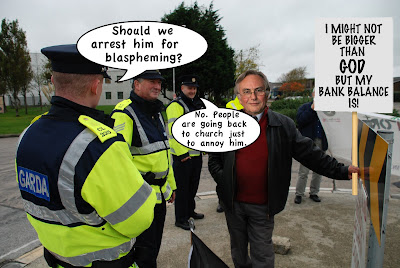